Whilst surfing through my Blogger reading list earlier a thought came to me* that there were two or three books which have had a massive impact on my wargaming life. More than any others. All three were published, and acquired by me, in the 1970s, so they've been around me during the last 5 decades. Whilst others have come since and have had a big impact on my hobby time, most of these have sprung from one or more of these wellsprings. I mentioned a couple of these last year in a trawl through my own history as a wargamer.

* Two things probably brought this about. One, I made a throw-away remark to david in suffolk  about the 1970s. Two, I had been thinking about Jonathan's analyses of the Great Wargames Survey 2020 which discussed the associations between age and wargaming interests.

The three books in question are:

The Young and Duffy books were both presents from my sister and brother-in-law, known within the family for the great books they choose as presents. I think I was 13 when I got number 1, then I bought the WRG rules in early 1978. This in turn got me into the SYW and I was subsequently bought number 3.

I want to take each book in turn and give a sense of how and why it has influenced my wargaming path, naturally starting with The War Game. Wargamers of a slightly older vintage often cite Featherstone, Grant,  and Scruby as their formative wargaming influencers. Others in this truly 'Old School' era were Young & Lawford, and Wesencraft. Whilst many of the chapters were written by these luminaries, mentally I classify the War Game as 'NQOS' (Not Quite Old School). For a start it's in colour! And the terrain is diorama quality. Also, the chapters do not describe wargames or wargaming but historical battles. For Tail-end Baby Boomers like me (I snuck in under the wire) the 70s were probably our formative years. The 1980s were by contrast the least favourite of all my 6 decades. In fact I pity people for whom the 80s were their formative years (sorry Gen-Xers).

So, this book, edited by the pioneering Peter Young, was produced near the start of the best decade and I got given it somewhere in the middle. I'd not seen the real Old School stuff at that stage. I'd not seen any wargaming books or rules at all. So getting the War Game was truly one of those mind blowing moments. First of all, the photography and the models are stunning. Peter Gilder was a major influence on the look with his terrain and some of the models. The other chapter authors, plus other wargamers, also contributed models. And all were superbly photographed by Philip O Stearns, who looks to have had an interesting life. He was in the OSS during the War, and as well as photographing wargames and toy soldiers, he also photographed  er-hem, models in 1/1 scale. There's more about him here including some of his contributions to something called Mayfair. No me neither 😉.

I'm not sure whether I saw the book first, or a display by the Grimsby Wargaming Club in the Army Recruitment Office Window, but both were around the same period. This was a Proper grown-up Hobby. (I think the GWC was called the Horse & Musket Society in those days).

So clearly presentationally the book was superb. Then there was an impressive list of authors, many with military experience themselves. The pen portraits of the authors gave it all added respectability in my eyes. Each chapter was well structured giving historical background to each of the battles, descriptions of the leaders, a summary of the forces engaged, an account of the battle and some very useful maps.I'm going to throw in some gratuitous photos here, because the book is such a feast for the eyes. And it conveys something of the sheer mass of material that was in front of my young eyes 45 years ago. Here's something from every chapter. This showed me what a rich field of interest was opening up to me. I hope it conveys some of the excitement I felt first opening up the book and when I devoured every page. And if you haven't read this book, I hope it inspires you to get hold of a copy.


Lots of eye-candy then. And lots of historical background. Much new information. And all very well put together and excellent told. But what helped nudge me in the right direction was the appendix. This gave me the bare bones to get started with war-games rules. Most of this was a revelation. I had not seen a set of war-games rules at that point. I still hadn't after reading this book. But I could cobble together my own on the basis of what the appendix described. Before this I was struggling with 1:1 troop ratios - shooting ranges were enormous on the table! 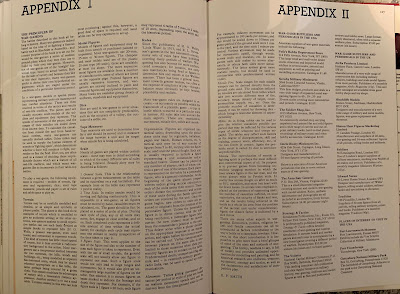 In conclusion then, the War Game really set me on the path to 'proper' wargaming. It gave me inspiration, validation, information, and (importantly) a framework. More than that it, educated me in areas of military history that I knew nothing about and it nudged me more towards the 18th century from Napoleonics where my area of interest had been the Peninsular War. The Seven Years War in Central Europe became my abiding passion, but not straight away, though the slow match had been lit.

I almost forgot that it also encouraged me to get into Ancients. One of the lads at the school wargames club was also interested in Ancients. Through him I heard about the Wargames Research Group, and thence on to book 2 on the list.....

What would you say are the books most influenced your wargaming career?