A Rabble of Gentility

Things have been quiet in the wargaming front here of late, not just because of the festive season. I might have mentioned recently how I have deliberately been holding back on ordering more books. Holding off that urge for instant gratification.

Part of my strategy has been to work my way through LOTR again. I finished the Twin Towers round about the time that my latest book order arrived. I’d almost forgotten I’d ordered it. 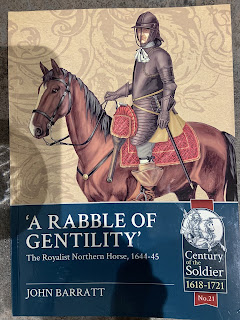 This cost me £5.99 plus postage from Naval & Military Press. It’s not a book I would have ordered direct from Helion, even at the discounted price. I thought it would be too narrow a field for me. There’s a couple of other books like that (the two Orange and the States volumes spring to mind).

I enjoyed this book more than I expected. It covers, as the subtitle suggests, the brigades of Royalist northern cavalry from the later half of the first ECW. The Northern Horse were a group of brigades, numbering from 1,000 to 2,000 at different times, that were originally part of Newcastle’s army. They fought at Marston Moor and Naseby and had some semi-independent adventures in between and afterwards, culminating on the shores of Cumbria late in 1645 when they had their last ride. The formation seemed to have developed a distinct identity, rather like some of the famous regional British divisions of the World Wars. Loyal to the King, but always balanced by their loyalty to their own ‘countries’ (counties in modern parlance) and their desires to free the North from the rebels didn’t always sit easily with the national strategy of the King. Like this bloggist, typical bolshy northerners.

There’s a few editorial errors that initially distracted me in the beginning, but either it got better or I ceased noticing them. A thoroughly interesting read. There are also a few episodes that provide inspiration for wargaming scenarios. A recommended read from this corner of the blogosphere. A happy addition to my growing collection of John Barratt works. 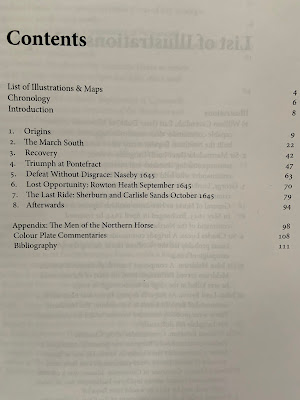