Things have been quiet on the wargaming front. Since the last post I've not read any wargaming related books, but blogs have been keeping me going. Reading time has mostly found me with my nose stuck in the Return of the King. I seem to have acquired a lot of books this year and I was poised ready to order new titles a couple of times recently but something held me back. It's so easy to see something I want, click and order it. It's not that I'm worried about the expense - as pastimes go it's not expensive as long as I don't go mad, and I've saved a bit with Lockdown. What I'm worried about, I suppose, is that it's too easy and that diminishing returns will set in. I wonder am I missing something. Is it just another form of consumerism, or displacement activity. Yes and yes, probably, to the last two, but mostly it's the diminishing returns thing. 'Where will it stop?', I ask myself if I simply order a book that I want, read it, enjoy it, then order another.*

* Aside. Where does this thinking come from? Is there some underlying facet of my character that makes me feel guilty about satisfying my own wants? It's not like I'm taking bread from my children's mouths. I didn't grow up in a particularly religious household. The family weren't churchy. Not irreligious. Just not churchy. We weren't lapsed Catholics, or from some brand of ascetic Protestantism. I had a few years in the Boys Brigade, admittedly an avowedly Christian organisation, but it never made me into a self-denying martyr. Growing up we were never flush, so maybe that's got something to do with it. Up until my 30s I didn't have a lot of spare cash, but when I did I loosened the constraints and enjoyed myself for a few years. That didn't cause any feelings of guilt. I just found that it didn't make me happy. Later in my 40s I returned to living on a budget and I was (and have been) happier. But I don't think that satisfying my wants will necessarily make me unhappy.

So I picked up ROTK again as I had read the Fellowship of the Ring a couple of months ago when hit by a similar urge to delay gratification. And that was a good decision in that I've been enjoying it and seen a couple of things I'd not noticed before, including a passage where it struck me that Tolkien might be talking about his own thoughts on fighting through the voice of Faramir. That might not be news to some people. I'm a fan but not one steeped in Tolkien lore. 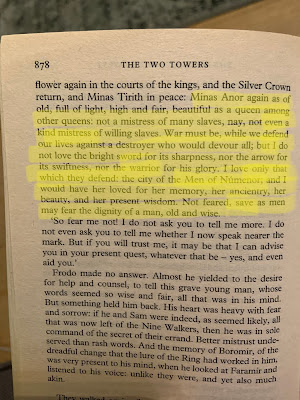 Anyway, this is all a digression within a digression again. I meant to post something sooner about book 2 on my list. For what it's worth. Before I discovered that there was school wargames club, I played solo with my own rules derived from the notes in the Appendix to the War Game. To be honest, these were a bit laborious, but in my mind this was serious stuff and so any dullness should be accepted. Maybe greater minds could come up with ways of combining all this "realism" with fast playability - perhaps computers could do all the work if only they could be made available to mere mortals. It was the mid-70s so way before even PCs. Finding the school club was a big relief. Here were a bunch of like-minded individuals and the 'house rules' followed the same principles as those suggested in the War Game. In fact the house rules were Arthur Taylor's Rules for Wargaming. Great stuff!

** It wasn't something massively publicised, but there wasn't a massive stigma attached to it.

In practice however, the rules, if followed fully, still took forever. There was lots of admin. Casualty rosters (each figure = 20 men). Written orders and simultaneous movement, and therefore scope for much lawyerly activity. Writing the orders with all the daft contingencies we made took longer than the turns. I'm not saying that we didn't have enjoyable games, but it was difficult to reach a conclusion in a couple of hours after school before we were kicked out. I did miss out on an epic D-Day game one weekend, and the boys who took part really enjoyed that, so maybe it was me.

Soon after I bought the newly published WRG rules for the horse and musket period (cannot remember where from though?). It took a bit of getting my head round the new turn phase sequence, but there it was. Simplicity! No written orders. No casualty rosters. Hurrah! (with a few 'huzzahs!' thrown in for good measure). They also came with a points system so we could each choose an army and have a nominally balanced game.

The fledgling Seven Years War interest, sparked by the Lobositz chapter of the War Game, was positively encouraged by the WRG rules. The rules had army lists in an appendix. Army lists only for Marlburians (WSS), SYW and the early Anglo-French conflicts in India. No Napoleonics. I'd been wavering between SYW and Marlburians, but as Martin already had SYW Austrians, SYW Prussians it was.

I had a trial game on my own then persuaded Martin (the lad who had the Minifigs SYW Austrian collection) to have a game at the school club. This attracted a bit of attention from some of the other lads because one, we were using metal figures (ooh shiny - and they were just that because they were mostly unpainted), and two, it was not the green book. The game was a success in more ways than one. I had the advantage of knowing the rules better, so I won; it turned out to be a very playable game (helped no doubt by the fact that we had no more than a battalion, plus a squadron of cavalry each); and it was of wider interest to the group.

The rules were a liberation from book-keeping and we could concentrate on being little Napoleons, not Berthier's. Other lads then joined in subsequent games and the arms race commenced! SYW began to butt in on the WWII and ACW table time. My mostly unpainted Airfix Napoleonics and Ancients conversions were consigned to the cupboard. Pocket-money and cash from jobs were funnelled into the fledgling armies. Month-by-month, as state resources allowed, new units were ordered from Minifigs via Toynes model shop in Grimsby. Units under these rules were economical too, when you consider that with the 1:50 ratio you only needed a dozen or so models instead of 30-40 figures. Points values of our respective armies increased, from 150 to 200, 300 and it didn't seem long before we were battling it out with 1,000 point armies. Megalomania had set in. 1,500 points became the norm.

The SYW group grew to five. So we ended up respectively with Austrian, Prussian, Russian, French and British. We started on historical re-fights. Sometimes 2 aside, sometimes 1-v-1. Action relocated from school to my mum's dining room or Tony's bedroom. 6 by 4 feet became 8 by 4 feet and eventually 8 by 6. Anything horse and musket period was adopted as a SYW battle. From Aughrim to Waterloo. All scaled down of course, so 1 battalion on the table represented 3 or 4. The length of the games stretched out from a couple of hours to whole weekend affairs. All day Saturday, right through the evening. Then again the next day until tea time ('dinner time' for southerners). Tony's parents were very tolerant!

Often games would be paused while we got side-tracked in various discussions. Military history. Or politics. Sometimes in intervals, whilst downstairs we'd chat to Tony's parents, or one one memorable occasions, one of the guys who worked for his dad. He had an interesting anecdote of interest to teenage boys. Let's leave it there.

Over time, some of the others dropped out. Martin discovered Lambrettas and sold his collection to Tony. Anthony, discovered I don't know what, and sold out to Tony. And I think the other Chris' collection was also procured by Tony. The height of the megalomania was some time in the early 80s. By then Tony had moved out from his parents house and was living in a flat above a pub on Cleethorpes promenade (what could possibly go wrong!). A couple of his other mates were interested in wargaming. Every SYW-looking model we possessed was put on the table. A simple scenario was devised. My outnumbered army (around 20-odd battalions with slightly more than proportionate cavalry, plus guns) defended a river against Tony's 40 battalions and God knows how many cavalry. Columns from one end of the table to the other. There wasn't space for deploying into lines. The 4 of us pulled an all-nighter, claiming to ourselves that our tiredness would reflect real generals' fatigue. To be honest, we did run out of steam a bit by the end. Not helped by the refuelling method. Well, our 18th century heroes couldn't drink the water could they. I think my side lost.

That was probably the last time I had a SYW game using those rules until I ran a solo version of Soor this time last year. A few years after that all-nighter I sold my stuff off to fund my Heroics and Ros armies.

So, the WRG 1685-1845 rules have a special place in my wargaming life. I had a LOT of fun with them. They helped steer me in the direction of the SYW (and all the subsequent satisfaction I've gained from that interest). The bibliography included a couple of books by a chap called Duffy. WRG 1685-1845 were almost ever-present in my longest spell as a social wargamer. And those games helped cement a friendship. You can't say better than that really for a ruleset.