Rather than getting on with finding a suitable table and running the ECW siege-campaign I talked about before the Summer, I've been faffing about reading and listening off topic.
The listening has been the We Have Ways of Making You Talk podcast with Al Murray and James Holland. But at least with a podcast I can get on and do other things.
The reading part has lately steered to the Second Anglo-Sikh War (after reading about the first in Flashman and the Mountain of Light). My book of choice here is Amarpal Singh's the Second Anglo-Sikh War. It's a bit of a whopper at over 500 pages and very good too. The same author has written on the First ASW and on the Siege of Dehli during the Mutiny. I've been thinking of Colonial wargaming for several years without actively doing anything about it, beyond buying A Portable Colonial Wargame and the Men Who Would Be Kings rules.
If I do go ahead, I've narrowed down my theatre of interest to the NW Frontier. As for period, well, I've been thinking of going right back to the 1840s and then following through successive generations right up to the 1930s. The intention is to approach it at skirmish or at most brigade level, playing scenario driven games with named characters. Not to be taken too seriously with silly names and possibly even an Imagination type approach. Expect bad puns. Also there could be an element of the Great Game involved, with devious Russian agents stirring up trouble. All being well, a brave British political officer might return the compliment causing trouble on the Tsar's frontiers which Count Karl Gustav Stutterheim will have to deal with. Suitable Russian figures can be found in ranges covering the Russo-Turkish War and right up to the Russian Civil War. Who knows. 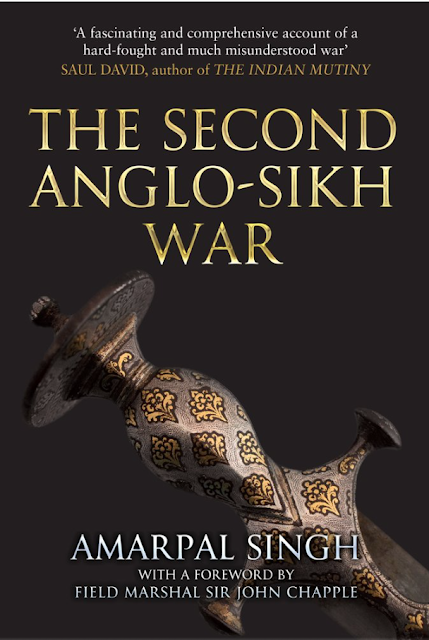 I might stick with 10mm figures, or I might even go up to 20mm since I need new terrain/buildings anyway, I needn't be constrained by what I have currently. Pendraken have a number of ranges that I can probably use as proxies, if not always directly what I want.
The second possible side dish is the Spanish Civil War. Now this is something that has interested me since the early 80s, although I haven't done much reading on the subject since university days. To me the kaleidoscope of factions involved on both sides is a key feature. I was intrigued by Trebian's approach to handling different factions, so I popped in an order for For Whole the Dice Tolls and I'm slowly working my way through that now. 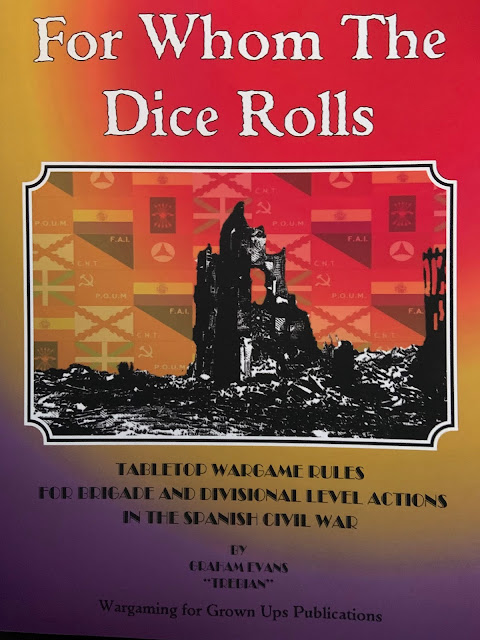 There's a lot to go through. For a start, modern warfare (and by my standards the 1930s is modern) is more complicated than the Horse and Musket era. All the different capabilities of AFVs for one thing, to say nothing of aeroplanes. It's more than I'm used to. If this goes ahead, I'll continue with 10mm ranges since I can use some of my existing stuff like woods. I also already have some T26s and a couple of trucks that could be used. Before taking the plunge, I will have a run through of the rules using my Continuation War figures as proxies. They are already mounted on bases compliant with Trebian's recommended dimensions. There are some spare Finns/Germans in helmets in the box of unpainted stuff. I might even get away with painting these up as Spanish regulars at this scale. Economy is the watchword!
Posted by nundanket at 15:31 19 comments:

Email ThisBlogThis!Share to TwitterShare to FacebookShare to Pinterest
Labels: Colonial, Faffing about, SCW

We had a second trip to Cleethorpes recently, and on Friday morning I took a stroll out from the house where we were staying. The sky was clear and the air still and cool. Perfect weather really. In the area known as High Cliff (which in fact is a low clay cliff, but higher than the surrounding land*) is a memorial to all the UK armed forces. The town plays host to parades on Armed Forces Day and this is the focal point at the end of the parade.

* Aside. In the early19th century the fishing village of Cleethorpes had become a resort, for presumably the relatively well-off as travel was by horse-drawn carriage. Much of the town's seafront was a low clay cliff, which was subject to erosion much like those on the Holderness coast of Yorkshire. By mid-century a railway had been built to neighbouring Grimsby, where the railway company had seen an opportunity and expanded the docks. So they built a railway and expanded the reason for building it to make sure it was successful! This was working so well that in the 1860s the railway company repeated the trick. As well as expanding the railway the couple of miles to Cleethorpes, they built the first part of the Promenade. As well as providing a place to perambulate (adding to the amenity of the place and encouraging more railway traffic), the promenade acted as a bulwark for the cliffs, preventing further erosion. That made the buildings in the old part of town safe too. Visionary stuff. This is very near the Royal Air Forces Association building, and in front of that in the Pier Gardens is a memorial statue to the RAF. This being Lincolnshire, there is a big association with Bomber Command.

These memorials I've known about, though both were installed in relatively recent times. A few paces further along in the gardens I came across a few new memorials.

The Royal Anglians are one of those multi-battalion regiments created following the mergers of county (infantry) regiments, in this case from Eastern England. 2 RAR incorporates the former Royal Lincolnshire Regiment (10th Foot), hence the nickname of the Poachers. The 'local' cavalry regiment was the 17th/21st Lancers, since subject to two further mergers, the last being in 2015. It's sad to note the flowers left on the bench, clearly indicating a loss in relatively recent times.

Across the way from the gardens, on Alexandra Road is a modern Baptist church. This replaced the earlier Baptist church that was hit by a bomb dropped by a Zeppelin in 1916. The church hall was temporarily being used to accommodate soldiers of the Manchester Regiment who had been sent to the area to help protect the Humber. Twenty-seven soldiers were killed outright with a further four dying of their wounds. 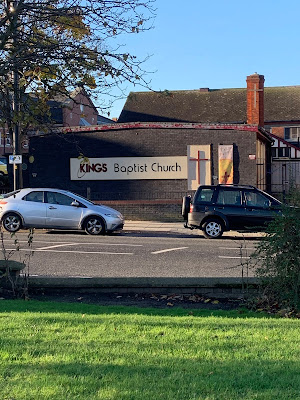 Two final memorials lie in this area. Both civilian. The author of the article on the Cleethorpes Heritage website, Dr Alan Dowling, was librarian at Grimsby Central Library and had a couple of books published on local history. One on the development of Grimsby and a companion book on the development of Cleethorpes. Both are excellent examples of good local history - not the usual collections of photos of 'bygones' that you get in local bookshops. On a bench close to the Poachers' bench is one with a plaque to the good doctor. 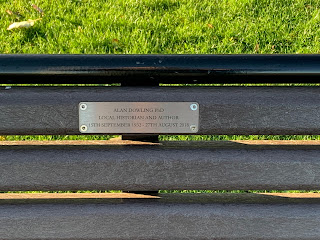 The other is a memorial to a much broader group of people. Those who lost their life at work. 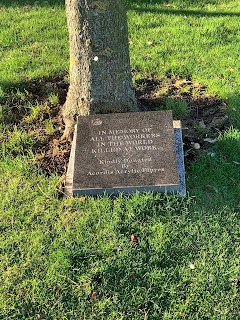 I'm glad that all these people referred to have been remembered in this way.