Not a wargame. What did you expect? First official use of the cabin was to listen to BBC Radio Humberside ont'interweb the game live from Edgeley Park, Stockport. Happy with a 0-0 draw. 12-1500 Mariners there on a Tuesday is testament to the mania that afflicts those of us born within sight of Dock Tower. 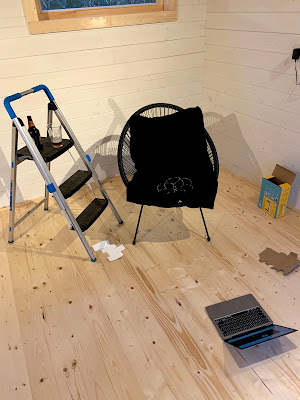 Occupation of the cabin has been held up by that bain of the wargamer, painting. Following completion of construction, last weekend, today and a bit of Friday was spent painting.

The bike shed/possible sauna has been treated with clear ‘stuff’. Very watery when it goes on, which means it trickles down your arm when doing high parts. But it dries sticky. Hard to shift, but with soap and water it eventually goes. The ceiling and roof beams of the main room have been similarly treated and the walls painted using two coats of a wargamer style ‘wash’. That leaves the window frames and the floor to do.

Externally, it requires 4 coats of different things. We’re close to 3/4 of the way through the second coat, but it’s very slow going. Very slow. After Sunday and Monday this weekend, Monday being a public holiday in England &Wales, I reckon we’ll need another weekend to finish the total job. Weekday evenings being relatively short and mostly reserved for swimming. Then we’ll be ready for the ‘HVAC’ ‘system’ installation.

Once painting is done, we can buy the furniture. We could in theory order something on line now, but I prefer to see and touch something like that first, and evenings and weekends are both full until the painting is finished.

All is not lost from a wargaming point of view though. We have a cabinet that we can move out of the house to, erm, house my figures and most of the milhist library. And there is a garden table that can go in there. Scope for a cheeky solo game the week after next.

Thanks to having a WiFi router in the cabin, as I painted today I was as able to listen to several episodes of We Have Ways podcast and Radio Humberside’s commentary of Grimsby’s first game of the season. It was emotional hearing the crowd back in the ground after 18 months. Up the Mariners.

Nearly there now. In terms of the professionals, it’s just the second fix electrickery (which should be next Tuesday) and internet* cable connection. And painting to be done by the amateurs. Oh, and the procurement of furnishings, on which the decisions have been more or less taken.
* I wonder what Catweasle would call it? 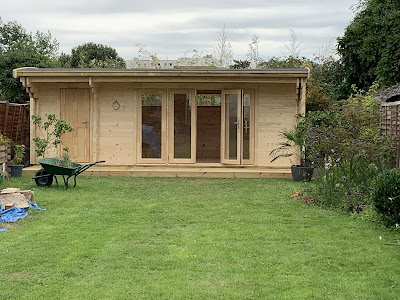 I was having vivid dreams about the expected delivery and woke up shortly before the alarm went off. Then after a shower the phone rang and it was a delivery driver with a large flatbed truck and huge crane, blocking the road outside. There was insufficient room for him to park the truck next to the kerb, but he got on with his task without fuss. I'm almost tempted to say 'he handled his equipment with aplomb' as he negotiated the overhead telephone lines, but you rightly don't expect innuendo from me.

In case you haven't twigged, my eagerly awaited 1/1 scale terrain piece had arrived on schedule. The unloading was complete by 8:00 and fortunately only 3 other drivers had to turn around and use an alternative route. There were no audible signs of annoyance on their part. In the unlikely event that they are reading, I apologise profusely. (Aside: why are apologies 'profuse'?). By about 9:30 the installation team had arrived and began laying out the kit in the back garden.  They built the base and anchored it in place using posts made out of some type of plastic, sunk into the ground. By 15:00 they had finished building up the walls to around waist-height ready for the electrician to do the first fix the following day.

Here is day one progress in pictures.


Here's hoping there are no hiccups like Bob Cordery has faced recently with the co-ordination between different trades. I'm not betting on it though. This is still Britain.

The end of the beginning….almost

Still no wargaming activity but much deep background prep. Three weeks ago I wrote about the start of the preparation work in the garden for the new command centre-cum-office-cum-yoga studio-cum-hangout pad. That work is virtually complete now. One final dump run on Friday and a bit of final pathway clearing for the installation team, who are supposed to be arriving Monday. I say “supposed to be” as we’re still all subject to the Pingdemic and general lack of labour.
At times the digging work was like archaeology. As well as countless bricks and pieces of concrete rubble, I found a piece of metal drainpipe about 9 feet long. Picking it up I understood how our tiny Hoplites must feel with the thick spears they come armed with. This got reburied to confuse future diggers. I also came across a charred layer. Evidence of the Great Burnings, when the local males were allowed to build huge edifices with anything remotely ‘wooden’ and to put effigies of 17th Century terrorists on top and set fire to them. The chronicles tell us that this ancient Anglo-Saxon custom was initially tolerated by the Finnic matriarchs, but the practice was eventually stamped out. Even attempts to celebrate Finnic festivals like ‘Vappu’ (aka Valpurgus) with bonfires met with silent disapproval.
I digress. All being well we will have a structure with mains electricity and the interweb, ready to be painted* in about a week. Then we have to furnish it and I have been ‘promised’ a trip to the great yellow and blue temple to the Scandi Gods. From a wargaming perspective I am thinking about a 4’ wide desk/table permanently against one side wall and then add one or two 4’ long foldable tables as required depending on the size of battle. Maybe a paint shelf above the desk. And then a cabinet for the toys to the left of the desk. The far end will be a comfy seating area with light pieces that can be carried outside easily. Then I’m in a battle to keep other objects (or ‘clutter’) down to a minimum whilst avoiding it feeling Spartan. And thus the constant negotiation between different cultures continues, between the underlying substrate and the newer elites.
In the meantime reading continues apace. I’m gradually working my way through a collection of ECW books bought from David Crook. Currently I’m reading a collection of essays called The Civil Wars: a military history of England, Scotland and Ireland 1638-1660. This is surprisingly readable  and is widening my understanding of the complex series of wars. But no, I am not going to ‘do’ the Montrose campaigns or anything in Ireland. I have an unfulfilled wish to do ‘something colonial’ and a growing itch to do the Spanish Civil War. And I have the long/delayed ECW campaign……
* what I would call ‘RAF blue’ seems to be the preferred choice for the outside.
Posted by nundanket at 16:27 18 comments:

Email ThisBlogThis!Share to TwitterShare to FacebookShare to Pinterest
Labels: Things to make and do, Things to read

Just seen this for the first time. It’s hard to describe it. Incredible. Moving. Shocking. Humane.

For those who have never heard of it (like me until tonight) it is a film of the memoirs of Norman Lewis in 1943-44. Described on IMDB as a documentary, but that doesn’t really cover it.