The Western Way of War

This is another of those posts that strays far from the stated subject matter. i.e. 'Ruminations on wargaming, especially the Seven Years War, the English Civil War and other 'black powder' periods. Occasional forays into obscure Nordic music and opinionated 'dribble' [sic] on Grimsby Town Football Club.' Perhaps I ought to update the blog header.

Just to keep it more relevant, I'll slip in the news that my Christmas present arrived in the post today from Belgium. I had to order it myself as the fact you had to pay in Euros foxed the other half. She told me that me paying for it could be in lieu of a present for her birthday, so two presents for the price of one! I'm saving the unboxing for Christmas in the, not totally unlikely, expectation that I will have forgotten it by then so I'll get a nice surprise.

Now back to the Western Way of War. This is not going to be about the book below, although there are connections in the subject matter beyond just the title of book and podcast. But, in the manner of Tristram Shandy, another digression. 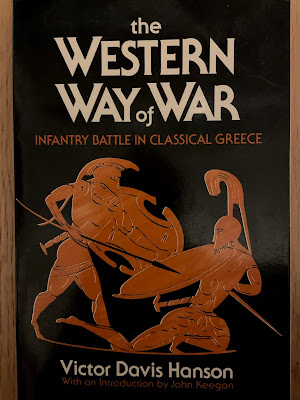 The Google app on my phone throws up some interesting feeds now and again. One that popped up this evening didn't lead directly to the podcast in question but led to an article on another website about British military thought. This one https://wavellroom.com/2020/12/09/cultural-apathy-and-dishonesty-within-the-british-army-say-do-gap/ . In itself it was an interesting read, and it contained a reference to a subject (procurement) that I've had an interest in throughout most of my working life (though this was never in a defence context). I followed the link and listened to the specific episode of the podcast in question.

That episode was right up my street, though it probably isn't for most people. Not what I was quite expecting either. It was certainly thought provoking. There were no easy or pat answers. There were some interesting nuggets along the way and I thought it ended brilliantly. “A lot of folk who know the answer to everything have probably never asked the right question.” (Professor John Louth, RUSI)

The two professors talking are ex-RN (the host) and ex-RAF (the guest expert) respectively. The latter seems to suggest that the new aircraft carriers were a bad idea - I interpretted it as 'the battleship in the age of the aircraft carrier' a.k.a. 'fighting the last war'. The other thinks they’re beautiful. No surprises for guessing which was which. 😀 I was quite pleased to hear that both profs had slight regional accents (which links to another recent feed in the Google app to the excellent British Library webpages on British Accents & Dialects).

Here is the link to the episode:

And the introductory podcast which I listened to afterwards:

What is the Western Way of War? . This one is probably of much more interest to wargamers and military history buffs.

I got one more episode in this evening, but there are more I want to delve into.

Email ThisBlogThis!Share to TwitterShare to FacebookShare to Pinterest
Labels: Things to listen to, Things to read