Well it took me nearly a year, but I've ticked off the last unfinished item on this list! Obviously, like any fallible wargamer, in the last year I've had the occasional slip and added to the pile and I still have some of that to deal with. But I've done the last item (paint the AWI figures) twice over due to a recent purchase.

Still to be done, are the Leven castle walls, some sapper types for the ECW. I also have odds and sods waiting decisions on what to do. E.G years ago I acquired some Soviet infantry in Budenovka hats that I bought for the Winter War alongside some Finns in winter garb. I'm not sure if I'm going to go ahead with that project. For a start I'd need a suitable battle cloth. For another I have a long standing wish to make deciduous trees for winter games not just for the Winter War, but I don't know how I'm going to do them. Also still in the long grass is a fortress for siege games for lack of a robust plan to make it.

All that aside, I'm pleased to have finally polished off that list so I'll raise an imaginary glass. Here are the finished AWI figures. 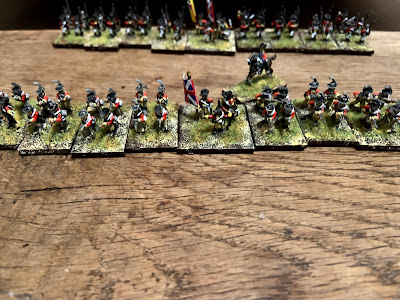