Books by the Donald. And others.

Yes of course I'm talking about Donald Featherstone. You didn't fall for that did you?

Amongst recent acquisitions are a couple of DF books. First up is this which I finished tonight.

The book contains an overview of the war, tactical methods, accounts of ten actions, plus rules. The battle accounts are accompanied by wargame scenario suggestions along with maps. I have to say, I'm not overwhelmed by it. It contains little errors, like mixing up east and west in some of the battle accounts, or has confusing descriptions of what happened. In the latter case simply showing units on the map would have helped - there are in a few cases, but often it's just the terrain layout. These are also not helped by not even clearly showing breakdown of the opposing forces. The rules look OK - very much old school, single figure removal as you'd expect - let down slightly by a confusing saving throw table. I may be a bit thick these days, but I like to see things clearly tabulated or shown on a map/diagram so you can see them at a glance without trawling back through the text. In historiographical terms it might also be a bit too old school, often referring to the British fighting in rigid formations and in inappropriate uniforms. Nevertheless it does provide some useful insights and is a handy source.

As an old school wargaming author, I don't find Featherstone as engaging as Grant, Young or Wesencraft. I have both Don's and Charlie's Pike and Shot books on my shelf and one of them gets re-read from time to time for the sheer pleasure. Clue, I don't think the author was a physio.

Notwithstanding that I also bought DF's Solo-Wargaming (in the History of Wargaming imprint). I haven't started reading this yet, but I've read lots of positive comments. 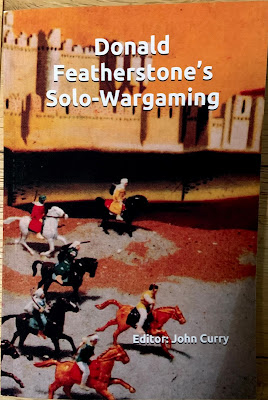 Last but not least was the Mollo book on Uniforms of the American Revolution, recommended by some of you. And very useful it is too, with not only colour illustrations but also descriptions of regimental uniforms including those not shown. I naturally used this when I was painting my troops recently. As with my other periods, I don't intend to identify specific regiments, only types, except for the 10th Foot naturally as they later became the Lincolnshire Regiment and I am a Yellabelly (of a sort). 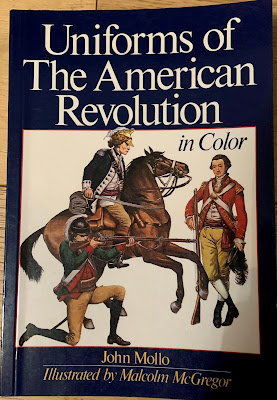 Now back when I was a lad, I read a book on the American War of Independence that had accounts of half a dozen or so battles, with decent maps and troop breakdowns. I think the battles included Camden, Guildford Courthouse, Monmouth, and Cowpens. It was a Blandford sized book, but that's about all I can remember. We're talking c 1980 so maybe it was published in the 70s. Any ideas?