Going to the Wars - start of a campaign

It is March 1642 Captain Starmer's New Year preparations have been interrupted by a messenger arrived from Britford,  a quarter before the hour of five.
"Show him to the Hall, Healey and have Dodds tend to his horse. And bring us both a hot toddy. It's typical Yarkshire weather. Tell the messenger I'll be along presently."
Having attended to his attire and with a final check of his magnificently coiffeured hair, Starmer entered the hall of his ancestral home Heckmondwike Manor.
"Compliments of his Lordship, Captain Starmer. He requests your company at his camp outside Britford. I am bidden to give you intelligence that it is a matter of the utmost importance to King and Parliament. May I give your reply to his Lordship?"
"Yes, err, Thonberry? I will give my servants instructions to have horses ready to leave after breakfast."
"Thank you Captain. I will return presently to Britford. His Lordship will despatch an esquardron of his Lifeguard to meet you on the road and escort you to the camp."
Approaching midday on the morrow Starmer, escorted by cuirassiers from Lord Carfax's Lifeguard arrives in the grounds of Shibdon Hall where Carfax is mustering the Yarkshire Association troops. 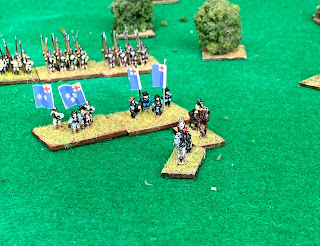 Carfax reveals that Starmer must assemble, post haste, all of the local trained bands that he can and accompanied by a troop of horse from His Lordships force. He must proceed to Wokefield where the Royalists are causing great inconveniences to the locals and to the cause of King and Parliament. The local Royalists have seized the castle there and are carrying out dragonades, plundering the area and collecting stores for the Earl of Tynecastle, the King's General of the North. The Royalists are not thought to number more than a handful of foot and a company of dragoons, and the castle has ill-kept walls so a quick success can be hoped for if the attempt is carried out with sufficient dash.
"Now remember, be swift and bold. The tyrants are led by a wicked mercenary lately come from Germany. He's cunning in his way but not really bright. Not a patch on thee and thy lawyerly ways.  What's he called Thornberry? "
"Alexander von der Pfeffel, my Lord."
"Aye, that's it. de Pfeffel. He's said to have served the late Swedish king, and then the Emperor, so he's completely unprincipled. But dangerous. Root the scoundrel out. All Ingland will be in thar debt and tha shall have my eternal gratitude Starmer lad. If tha carries this off. If tha don't, the poor people of Yarkshire will remember this for generations. If affairs go well at Holl, to where I must go, I may be able to send you more men, powder and lead to help secure the castle, for Tynecastle is bound to want it back. Now good luck, and God's speed."
Posted by nundanket at 06:01