Beating about the bush

I have made little progress on my prospective ECW siege campaign despite fewer distractions. The lack of motivation that I felt in mid-April seems to have returned and stuck around for the last few weeks. There doesn't seem to be any particular reason for this.

However, I have done a fair bit of reading in recent weeks. After finishing the Vyborg 1944 book, I picked up the book on Monmouth that I put down in March. The book is good on the historical background to the Duke, even reaching back to the origins of the Civil War. The downside of this is that Monmouth, or rather the boy who would become the Duke of Monmouth, doesn't make an appearance until well into the book. Even then the actual biographical detail on the man is rather thin. He appears almost as a cardboard cut-out, a puppet if you like, and then but briefly. The book is very strong on the politics of Restoration England and I learned a lot about that subject. But not much about Monmouth himself. My biggest criticism however is the way it is written. It reads like a series of undergraduate essays, is very repetitive in the manner of modern historical documentaries, and at times sails close to gushing a 'chick lit' style. 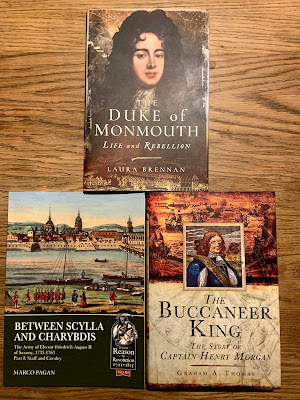 Next, keeping to the Restoration period, I read Buccaneer King: The Story of Captain Henry Morgan. An interesting subject and one with lots of potential for small scale wargames as I mentioned to the Polemarch on his blog. Surprisingly, most of the action is on land. Well it was a surprise to me. But if you like your ships and piratical adventures on the Spanish Main, this could be for you. I'm tempted, but I'm not sure I'm ready for a new period. At least not one which will require a whole new set of terrain, boats and buildings. The big bugbear for me with the book (well apart from the opening chapter, which is pure fiction) is that the author has an axe to grind. And keeps grinding it. Overall a decent read though and a good introduction to the early colonial period.

In parallel with the Morgan book, I've been dipping into the Portable Pike and Shot Wargame. Some thought-provoking stuff in there. Of particular interest is the chapter by Arthur Harman on siege games. Now I've picked up Devon and Exeter in the Civil War, which was in the batch of books I mentioned in the last post.

I almost forgot that I also order 5 packs of 10mm ships guns from Stonewall Miniatures. They're meant for the early 19th century I believe but they pass for 17th/18th century guns as far as I'm concerned. No I'm not intending to swash my buckle on the Spanish Main. I plan to use them as fortress guns as the carriages are similar. I bought some ships guns from Irregular for this purpose a few years ago, but the carriages are a bit too low for fortress guns, and the ones from Stonewall appear to be higher.

Also in preparation for the siege campaign, I've been thinking about how to model the castle that will be subjected to the siege. Last year I bought some castle walls from Leven, on the One Scale Down principle, but these look a bit too small. I would also need to add some platforms for my guns and men to stand on. In the absence of anything else, I had an idea of how to produce something flexible and cheap. Of that more anon.

Email ThisBlogThis!Share to TwitterShare to FacebookShare to Pinterest
Labels: Faffing about, Things to read