Outbreak of Real Life and a Good Read

It’s been quiet in this part of the Blogosphere (“no ‘you know’ Sherlock”). Not only the usual absence of wargaming, but also no encounters with stags, Swedes or streams. Not even an update on exercise or weight gain avoidance (both going well so far this month since you ask).

The big disrupter in the Nundanket realm lately has been finally ‘getting the kitchen done’ after five years of humming and ahhing, pondering the merits and costs of having an extension built and living with what the Wickes advert calls ‘house embarrassment’. We finally took the JFDI decision to refurbish the existing space on the basis that the wife doesn’t want me working until I drop.

The ‘war room’ has been severely constrained by the need to store the cabinetry and appliances whilst the work has been done. The dining table extensions have been put away and the table shoved up against the wall. It works very well as an office desk, but I don’t have a Portable Wargame style set up to make use of the desk space not taken up by the computer screen. Bad planning!

Also preparing even something as simple as a sandwich takes about three times as much time as it normally does, let alone doing the dishes etc.

What I have been doing with spare time is reading more. Currently I’m in the middle of the book below, which I’ve been meaning to get for years. 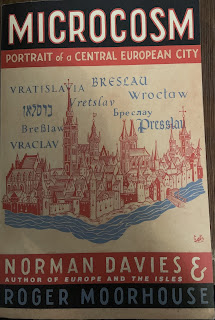 The book starts with the shocking events of early 1945 during which the city of Breslau (now Wrocław) was under siege by the Soviets and their allies. Then the reader is taken back to the earliest times of the city - when we know there was a settlement but not what it was called. Each chapter corresponds to successive periods of history when the city fell under the control of different states - Polish, Bohemian, Habsburg, Prussian, Imperial German, Weimar and Third Reich and finally back to Polish. Each chapter uses the name most associated with the relevant state (hence the names on the cover). For the ‘unknown name’ period the term ‘the Island City’ is used.

The writers take you through the socio-economic, political, religious and cultural aspects of the city and the wider historical context in each period. One theme that ties it all together is that this city has never been wholly one thing. Neither German nor Polish nor Czech. Neither Protestant, Catholic nor Jewish. Reality is a lot more complex and messy than that. It puts to bed the nationalist myths (of all varieties). Interestingly, the city was solidly against the Hussites in the 15th century, but early adopters of Protestantism in the 16th without descending into the worst excesses of iconoclasm and religious violence. When the Counter-Reformation came, it too was relatively non-violent. I’m still at the Habsburg stage, so there’s lots more to come, including that snuff-bedaubed, French-speaking opportunist from the north.

Whilst this is not military history (though it does include a decent map of the Battle  of Breslau, 1757) it is great background reading for many periods. A big thumbs up.