On one of the very hot days recently I had a day's holiday and decided that rather than the usual walk near a historic site I would swim by one. This opportunity came about following one of our walks with our youngest. Youngest by a minute that is. Walking on the Hampton Court side of the Thames one having we saw people having fun by a couple of small beaches on the opposite bank. A few times over the past couple of months we saw people swimming in the river, including when swimming pools were still closed and it looked very tempting. I hasten to add for the squeamish that the river is cleaner than it's been for 150 years. Apparently.

I have been swimming in the river before, from the same spot opposite Hampton Court one October morning 8 years ago in one of those open water swim charity events. I think the water was too cold for bugs then. 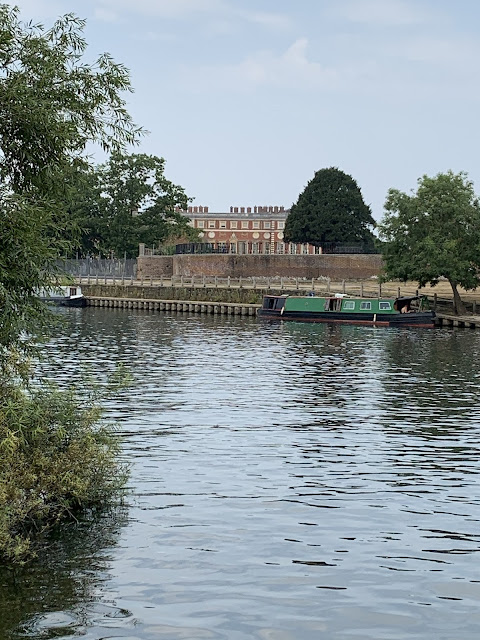 My daughter (suitably primed with 'elf & safety advice) went to one of the beaches a couple of times with friends after that walk and reported back that, apart from having a fabulous time, the water was not in the least bit cold. So on the aforesaid fine day, after a morning swim in the open air pool not a million miles from the same spot, I rallied the household for a picnic and a few hours 'at the beach'. We parked up near the railway and followed the youngest to the riverside. Lunch before swim (not risking touching food with hands that might have picked up bugs are in the river) then in the water. I can happily report that the temperature was a lot warmer than the 12 degrees Celsius it had been when I last took a dip in the Thames. It was positively balmy. Before going to the river I had thought I might swim up the Ember, the tributary which pours into the Thames nearby, but once I saw the 'plants' on the surface I realised I could not be Captain Benjamin L.Willard. I restricted myself to swimming a couple of hundred metres in either direction in the main river.

I intend to go back sometime and venture further afield. Maybe with one of those bright float things to make myself more visible to any passing boats.

Email ThisBlogThis!Share to TwitterShare to FacebookShare to Pinterest
Labels: Places to go