I didn't get any wargaming done (fell asleep after lunch) but I did finally get around to putting flags on my ECW horse and the rest of my foot.  Once I actually got cracking I had a burst of energy and got on with re-boxing my SYW figures.  This entailed lining more Fererro Rocher boxes with magnetic paper and putting magnetic strips on the bases of the soldier. I had enough for just the Prussians. To gets the Naps and the rest of the SYW collection done I reckon I'd need about 12 more of the FR boxes. Oh dear! I'll have to make one of those pyramids with the chocolates and play ambassador.

Late edit: Oh I nearly forgot to mention that the old Ikea boxes that previously housed the SYW Prussians were re-purposed for storing my woods (the boxes are slightly too shallow for the tallest conifers, but they'll bend a little as they're made out of 'bump' pipecleaners). Fortuitously they all just fit in the two boxes. This means I could get rid of the scruffy old cardboard boot box they were previously stored in. So an overall improvement in neatness - M.Foy would be pleased, if it wasn't for all the flock.

Later I decided it was time to get all of the ECW collection out and set them up on a 1-for-1 basis. So here they are: a regiment of foot about 500 strong, with forlorn hope and guns out in front, and 4 troops of horse on each wing (about 300 in total excluding command figures). There are several more command bases in the boxes - I've just laid out one per troop or company). 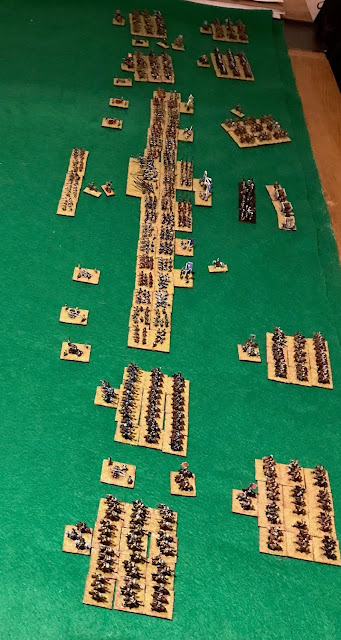