The Eastern Association men led by Colonel Sydenham Hill, temporarily elevated to Major General, took the direct route from Boston via Spilsby, then on to Grimsby via Louth. One of the regiments of horse scouted ahead of the main body whilst the other (Hill’s) took the coastal road, along the edge of the marshes to procure mutton and salt. Crofton Park, Lt Col of Hill’s regiment of horse, found the locals a peculiar bunch and difficult to understand. ‘The spietch of the marsh fowk is base and nigh impossible to understand containing as it does many words of the old Norse tonge. They appear shy of strangers, superstitious and at first as children in matters of trade yet my quartermaster discovered the bargain he had made was not as good as he first thought.’

The Royalists, under command of Lord Beddington Lane (husband of the fabulously wealthy Lady Therapia Lane) marched from their assembly point near Gainsborough. Once across the Trent, they followed the old Roman road north to Scawby near Brigg, then headed east sending two troops of horse to keep an eye on Barton whilst the main force proceeded to secure the mouth of the Humber at Grimsby.

Hill, fearing that the Royalists had already got ahead of him veered off the Louth Road before Scartho and followed tracks heading towards the coast where he could camp on the higher ground above Grimsby. Hill’s regiment under Lt Col Park were dispatched on a circuitous route towards Itterby and Oole in the east in a kind of reconnaissance in force cum foraging expedition, whilst the infantry and small artillery train, trailed behind the other horse regiment via Humberston towards Weelsby and Clee. Unbeknownst to Hill, Lane had also decided to perform a wider sweep, south of Grimsby to head off the Rebels before they could approach the town. His main force was in the Weelsby area heading towards Clee whilst one regiment of horse scouting ahead had taken a wrong turning through the marshes to the east of the town (possibly misdirected by a local malcontent) whereupon they then turned south heading towards Oole on the track by the coastal marsh or Fitties. Ahead of the main column, the dragoon regiment had already secured the village of Clee where they were making themselves comfortable when Rebel flags were spotted on Beacon Hill above Clee. Almost simultaneously (according to letters written later by a captain of horse on the Weelsby road and the colonel of dragoons, who both heard the church bells of Saint Trinity and St. Mary the Virgin church in Clee) Rebel horse cornets were spotted on the road from Humberston.

Area of the battlefield

By the seventeenth century the village of Clee had a population of over 300, including Clee's nearby 'thorpes' of Oole, Itterby and Thrunscoe on the higher ground above the marshes which surrounded the old port of Grimsby. Since the silting up of the old haven around the turn of the 16th century, Grimsby's population by contrast had declined from its late medieval height of 2000 to around 650. Nevertheless, the port still provided a haven from the North Sea and was within canon shot of the roads which carried shipping up the estuary to Barton and Hull. Control of the area thus gave command of the southern and eastern approaches to the port and eventually to the seward route to Hull.

At the time of the Civil War enclosure was still 200 years in Clee's future, so apart from the immediate small plots surrounding the village, the area was dominated by the open field system. This meant plenty of room for manoeuvre for both sides in the coming battle.

The Battle of Clee Fields. 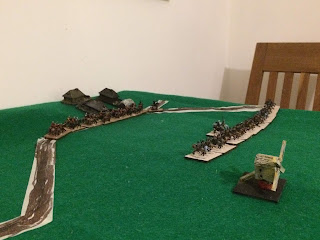 After their victory the exhausted Parliamentarians lay down where they stood. The Royalists fled north towards Grimsby via little tracks across the carr. Over the following days the Roundheads began to fortify Mordaunt Hall in Clee where Sydenham Hill set up his headquarters. Traces of the earthworks can still be seen to this day in the old 'donkey field.'

Gradually they regained their strength, strays and not a few turncoat royalist soldiers, returned to the colours no doubt in search of a good meal in this chilly coastal district. Lord Lane's bedraggled army coalesced around Grimsby, mainly on the site of the old Wellow Abbey, once they realised there was no pursuit. His Lordship negotiated with the Freemen of the Borough for entry to the town and for supplies (even a beaten army can be very persuasive). The Royalists' demands were moderated somewhat by Holles who had some interest in the on-going prosperity of his seat.

Over the succeeding two weeks both sides strengthened their respective positions, and earthworks appeared around the perimeter of Grimsby. A redoubt was built on the low rise of Holme Hill (really just an island as its name suggests) where two of six ships guns, recovered from a stranded Dutch vessel, were placed by the Royalists. Two more were placed at each of the main roads into town. Lord Lane hoped the effluxion of time and the approach of colder weather would force Hill to retire to the south. Urged on by entreaties from Sir Thomas Fairfax and the Earl of Manchester, concerned over the threat to Hull, Hill had other ideas. He energetically made sure the area was scoured for supplies and that his powder, shot and match were all replenished. Confidence began to rise in the Parliamentarian camp. They had seen off those idolators and the benders of the King's ear once already. They were sure they could do it again.

Could they indeed?
Posted by nundanket at 17:05