Boxing and Basing, or ‘Ambassador, you are spoiling us’

Ever since I switched to the Polemos basing convention, I've been on the search for the Holy Grail. The perfect sized storage box. Whilst there is no set size for bases under Polemos rules (at least the Napoleonic sets of rules, 'Maréchal de l'Empire' and 'Général de Division'), the standard size adopted seems to be 60mm wide for cavalry and infantry and 30mm wide for artillery. Depths are usually 30mm (60mm for brigade sized horse and foot units in Maréchal de l'Empire). I have all my SYW and Napoleonics (both periods in 6mm) on bases 60x30mm for infantry and cavalry and 30x30mm for guns. Containers that were sized in multiples of 60 or 30mm were therefore what I was ideally looking for. Height was of secondary importance, though not to be ignored if I wanted to disguise how big my toy collection was!

Out on shopping trips I'd be pouring over the 'storage solutions' section of hardware stores, pound shops, or in that well-known Swedish shop. Often cursing myself for not having brought a tape measure. Family members would ask why I needed a tape measure when the containers dimensions were on display. In case you are not already on the same page, I should point out that it's the internal dimensions that are the critical feature. Are the internal dimensions in multiples of 30mm? Very few of them are.

A decade ago in said Swedish interiors store, I came across the boxes below which were then retailing for a few quid each. 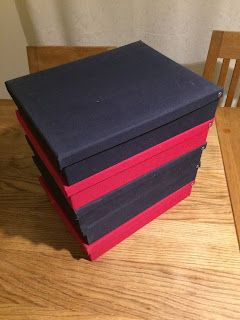 Overall measurements are 320x250x65mm, but more importantly the internal dimensions are a shade over 300x240x60mm. Enough for 40 bases. Because of the depth, I decided to store the figures double height (using bubble-wrap and newspaper bewteen layers). In 7 boxes I have an Anglo-Spanish Napoleonic army and Austrian and Prussian SYW armies. I knew at the time I should have bought more but thought 'don't be greedy, it's enough for now, you can always come back when you need more'. No prizes for guessing that when I did eventually go back the line had been discontinued.

In the succeeding years I found that boxes from Macbooks and i-Pads have reasonable dimensions, but the buggers keep changing the sizes and there's only so many devices of that price that a household of four can justify. And as with the Ikea boxes, these are on the deep side for 6mm or 10mm figures. For a few years this didn't matter as my collection didn't expand in size.

When I finally took the plunge and ordered some Pendraken ECW figures, the hunt for the ideal box was resurrected. It had never quite gone away - I was forever examining the range of boxes in Clas Ohlson (another outlet with Scandinavian origins!). Then that Christmas (2017) one of the wife's friends gave her a box of chocolates. It was a fairly simple looking, clear plastic box about 8 inches square and 1 1/2 inches high. Hmmmm! As soon as the chocolates had been finished, out came the tape measure. One of the best presents I got that Christmas! 210x210x35mm. Even allowing for cavalry standards and upright pikes they were perfect for my new toys! 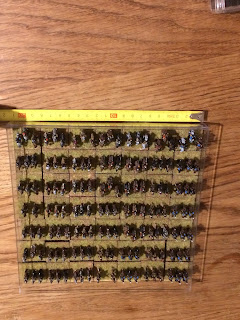 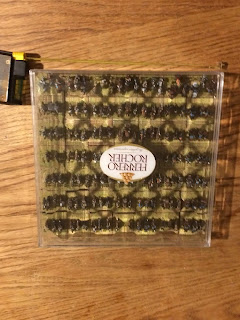 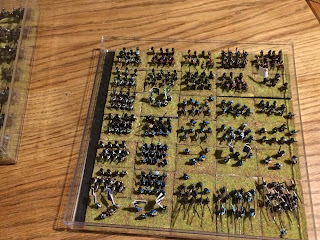 On the third picture you can see the sticky-backed 'metallic paper' I line the boxes with. I stick magnetic paper underneath the MDF bases the figures are mounted on to stop them moving.

Incidentally, horse are based on 30x30mm bases, foot and dragoons on 40x30mm. Pike in the 'charge' position are on 40x60mm bases. The charging pike are mainly conversions from Pendraken musketeers firing, since no one really does figures in this pose (Irregular do pike in the receiving cavalry position).  Guns are mounted 1 per base, 30mm wide by 40mm deep, with about four gunners in attendance.

There are generally 3 ranks of four foot on each base of pike and shot (or should that be 'shotte'?) and 1 rank of 3 horse on each base. Horse bases are placed in 2 rows of bases to represent 'Dutch' style tactics and 1 deep for 'Swedish' tactics. Command figures are 3 to a base for horse (officer, trumpeter, standard-bearer) or 4 for foot (officer, drummer, 2 standrd bearers). As I mentioned in a previous entry, hose can be any number of bases to a regiment, with one base being a troop. Naturally, there is one pike base plus two of shot for each foot unit. Command stands are supernumeray but are used as markers to indicate what's going on in the unit. At 1mm to the yard, the figure scale is about 1:20.

Getting back to the boxes, UK readers of a certain age will remember this advert.

You are really spoiling us

Standing request now for me with my kids is, if in doubt about presents, get Dad a box of Ferrero Rocher chocolates (but not the dinky little ones with two tiers, they're totally the wrong dimensions!). My storage solution of choice retails at around £6-7 and it comes with free chocolates!

Email ThisBlogThis!Share to TwitterShare to FacebookShare to Pinterest
Labels: Storage