The American Civil War that is. PBS America (on 'Freeview' TV in the UK) are showing Ken Burns documentary series. The whole series in one day by the looks of it. Fabulous programme what I've seen so far (I missed the episodes covering 1861-63).

I have a fascination for, but only a relative passing aquaintance with, the ACW.  Something about it resonates with this Englishman. The fact there's so much material available in English helps (and what language they had in those days!), but it goes beyond that. Some of the photography is so sharp even after 150 years it seems so contemporary. It's real in a way that most previous wars do not seem real (the Crimean War being the obvious exception in the Anglo-centric sphere). Like our own civil war two and a bit centuries before, it was a struggle sparked by a constitutional clash and was infused with religious feeling, and had the highest proportionate death toll in any of the nation's wars. In fact the ACW death toll was absolutely higher than any other US war. Staggering.

I'm not sure I can take 9 one and a half hour episodes in one sitting though. So I searched for lighter relief. Scanning through the schedules I came across a programme entitled 'British Sporting Greats' on a channel called Together. Closer inspection revealed this list of 'British' sporting heroes: 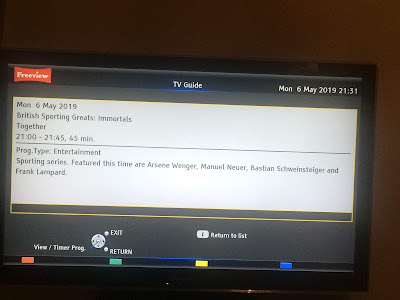 Arsene Wenger (French), Manuel Neuer (German), Bastian Schweinsteiger (German), and Frank Lampard (English - yes a real Brit!).  Now I'm not doubting the sporting credentials of these gentlemen but Britain is not so short of sporting greats that it needs to co-opt them from other countries. Hmmmm! 🤔
Posted by nundanket at 14:08