In Deo Veritas - my take: so far

These rules (published this year by Helion and written by Philip Garton) are intended for full-scale battles in the 17th century. I guess they are really for European battles (including those involving ‘the Turk’) but could possibly be used for conflicts further afield, or even further back in time. The book is soft back with 118 pages.

I’ve included a couple of photos of extracts from the book. If anyone objects on the grounds of copyright I’ll happily remove them, but I don’t think they give much away in terms of IPR.

First I'll give an overview of the rules, then attempt to explain how they work, then give my personal opinion of them.

The book contains everything you need in terms of the ‘software’ to get started, as you can see from the contents list below.

To my mind introductions are an important part of any rulebook since they are an opportunity for the rule writer to explain the basic thinking, philosophy and aims behind the rules. IDV does this well in my opinion. 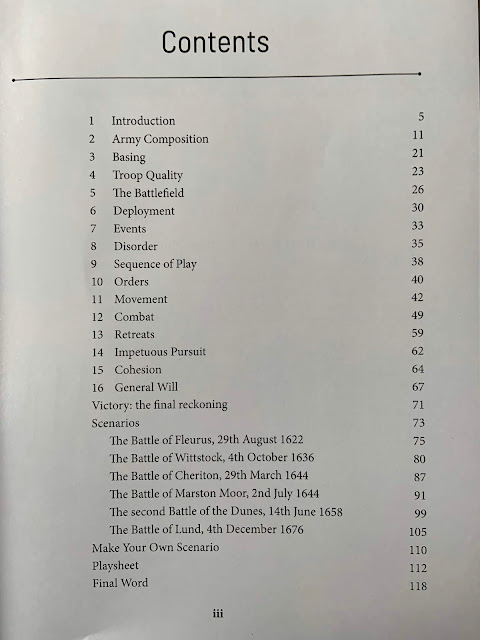 The six scenarios given are presented in a nice clear style with maps and orders of battle, whilst acknowledging that the information is not always available in the historical record, and that sources can be contradictory or unclear. Good to pick up and go.

'Playsheet' is what in some quarters are known as Quick Reference Sheets (‘QRS’). Also included is a page of order marker templates which you can copy and print - of this more later.

The Battlefield section contains a Terrain Generator for non-historical battles as well as describing the terrain features themselves. There is a touch of WRG about the terrain dimensions.

They're generally intended for use with small scale figures, but this is about the look of the thing rather than being an essential requirement. Ground scale is 1 inch (25mm) = 40 yards. A turn is 20-30 minutes. They are not specifically aimed at gridded games, though they could probably be suitably adapted.

Armies are divided into ‘Wings’ (what might be termed ‘Battles’ since the centre is called a ‘Wing’ in IDV) and the basic game units are ‘Brigades’. There are also units of detached troops to represent bodies like ‘Commanded Shot’ or a Forlorn Hope.

The turn sequence is Orders, Movement, Combat. Combat includes shooting and then melee. During the Orders phase players issue Hold, Attack or Withdraw orders at Wing level by placing tokens with these words on face down by the Wing Commander. Turns are alternate by Wing and the order of movement is determined by the turn of a card from a shuffled pack with each card representing a wing. Let’s say there are 3 Wings on each side, Centre (C), Right (R) and Left (L), with Players 1 and 2. There will be 6 cards in the deck and if 1R is drawn first, Player 1’s right wing moves first and follows the Hold, Attack or Withdraw order it placed in the orders phase. If the next card drawn is 2C then Player 2 moves his centre according to the orders he gave earlier.

A foot Brigade is 900-1200 men which is made up of men from more than one regiment. I presume by the frontage of a unit (75mm or 120 yards in IDV) that in ECW terms this is meant to be a strong ‘battalion’, although it could be a multi-battalia brigade thought the depth is a bit tight. A cavalry Brigade is 400-600 men also on a 75mm frontage. The Marston Moor scenario in the book for example gives 29 brigades for the Scots-Parliament army so I'd go with battalia. Tercios can also be used - these are also single base gaming units but are twice the size as Brigades (same frontage but double the depth) and have appropriate advantages and disadvantages.

Classification of Generals: Politico, Normal or Experienced. Further sub-classified into: New Appointment, 2-3 Years Experience, Professional (4 years +). Politicos represent those, less competent, generals appointed because of who they were not because of their military qualifications. I like this idea, at least the main classification - adding an extra layer might just complicate things or add to the admin burden. A table is shown which presumably represent D6 rolls to select the characteristics but there is no real explanation. Possibly it entails two successive D6 rolls. There are also optional rules for Willpower and Heroes.

Units can move a long way each game turn - the slowest foot for example, Tercios, move at 10 inches (400 yards) a turn and cavalry Brigades move 18 inches (720 yards) so they fairly whizz around the board. Opposing cavalry Brigades can therefore be in melee after 1 or 2 turns at most.

Units are single bases of figures and there is no figure removal. Units are degraded through 4 steps: Sound; Disrupted; Disorded; Routed. Units can move back up the scale if ‘Reformed’. The book suggests using coloured counters, but there is no reason why you can’t make Brigades multiple bases and removing (or adding) bases accordingly if you don’t like ‘clutter’. Personally I would use the position of my command stands/casualty markers to illustrate unit state and orders as I’ve done with my own rules. Degradation happens through hits being inflicted by shooting, melee, terrain, being passed-through, or as a result of failing a Disorder Test. A modified D6 of 4 or more means the test is passed.

Shooting and Melee are both conducted (in the Combat phase) by rolling a certain number of D6 for each unit, scoring a potential ‘hit’ on 4,5 or 6. The number of D6 rolled depends on the circumstances - e.g. foot units with pikes get extra dice in melee against horse; disrupted units get a reduced number of dice. The other side then gets a number of saving rolls based on the type of unit and its circumstances. With shooting the number unsaved hits determines the effect on unit status (e.g. with 1 hit a Sound unit becomes Disordered). With Melee the number of hits scored are compared and the relative score determines what happens to each opposing unit (Stand-off, Recoil, Rout etc).  I like this mechanic because it means units’ effectiveness is gradually degraded and there is no record keeping - ‘bang’ and the status either stays the same or goes down immediately.

There is no distinction between ‘trotters’ and ‘gallopers’, though cuirassiers get an extra Saving Throw die.

At the start of the game both players roll a D10 and this might result in an ‘Event’. A further D10 roll determines what type of event it is and what the result is. These might either help or hinder a player. These are all nice and plausible but nothing will happen that means one player will find it impossible to win. I like the idea of random events that are outside the normal game mechanics. Having this done at the start of the game means it’s done and dusted, simples.

Wings may become ‘Fatigued’ in any turn when it has a routed unit. This is determined by rolling 7 or less on a modified D6 (i.e. high is bad). The Wing can then only follow Hold or Withdraw orders. If it fails another test, the Wing becomes Exhausted which means it must Withdraw. A further failed test means the Wing Collapses and all its units’ status is degraded, and the Wing must retreat the next turn. There's even a chance that the Wing Commander will shamefully leave the field rather than stay and help his men. A nice touch.

The effects of all this on the Army is tested at the end of each turn that it contains a Fatigued Wing (and presumably Exhausted and Collapsed). Failure in this test means the whole Army withdraws. To determine the sale of Victory if one side withdraws (both could withdraw simultaneously) a modified D6 roll is compared to a table of outcomes.

On some occasions high die scores are ‘good’, on others high scores are bad. e.g. with the Disorder Test, high is  ‘Good’ and with the General Will test, high is ‘Bad’.  Personally I feel this is not helpful and would prefer keeping it consistent so a high die roll is always good and low is always bad - it helps those of us with failing memory (and let’s face it that applies to a lot of historical tabletop wargamers!).

Very good overall. Clear, good type face. Handy sized format in terms of page size. The book is written in a nice readable style. It’s interspersed with period quotations to illustrate some of the principles in the rules. Another nice touch.

The book has 4 pages of QRS. Once you’ve got the basic understanding of the rules you could probably play them just using the QRS. I say probably because I haven’t actually tested them yet. I haven't yet really scrutinised the QRS yet so check it all makes sense and is congruent with the main rulesThere’s a risk you could break the spine when trying to keep the page flat to photocopy the QRS pages. Same with the Order tokens, although there are ways round that.

There are lots of photos of great looking models. Some people have strong views on this sort of thing. I’m not one of them. They are nice to look, and in some cases are used to illustrate the rule mechanisms, and in others are pure eye-candy. I think that sometimes they can get in the way. e.g. the procedure for determining an army’s will (‘General Will’). I was trying to understand what the results table meant - was that a score you have to exceed or equal? I looked and looked, and it wasn’t until I turned the page and saw the explanation. Maybe it's just me. Personally speaking I would prefer having the explanation first then the adjustments to the D6 roll, then the table and then the photo. This way what you need to know is all on one page. I know you should read through the whole book first then, try to understand it properly on subsequent reading. I did do this, but hey, I have a memory like a sieve these days. 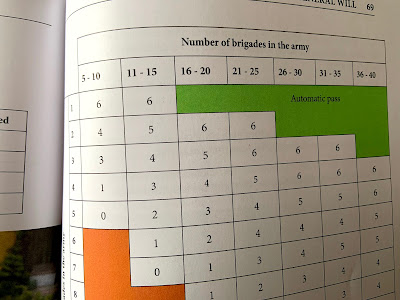 It's fair to say that I haven't come across major bloopers.

I like the look of them overall, bar the quibbles mentioned above. However, the ultimate test is to see how they play so I will reserve judgement until I’ve had a game, which I will definitely do soon. That is more positive than it sounds since there are many rulesets that I won’t even bother trying because they are too fiddly or don’t begin to address what I am looking for in a game.
Posted by nundanket at 09:12