I had 18 bases for the Finns and 34 for the Soviets. The Soviets, led by Major Vasilikov, were attacking across the short open plain between the forest of the east and the town of Tiipuri on the edge of further forested high ground to the west. With this number of bases I allowed each side a D12 to roll each turn for Leader Points ('LP').

Kapteeni Pekka Pitkahousut placed half his men on the front ridge in the fields and the rest on the reverse slope, in the sunken road (mortars) or in the town. The Soviets started with the initiative being the attackers, and for the first few turns retained it by rolling higher on their LP D12 each turn. This enabled them to pour infantry across the open ground, but they weren't allowed to bring artillery, mortars or air power to bear until the Finns revealed themselves by opening fire. 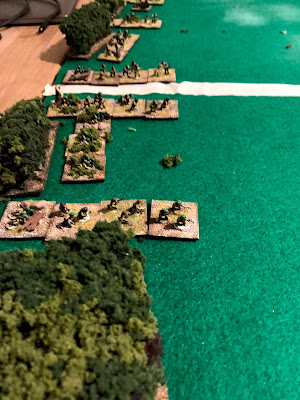 The defenders duly obliged. Early fire from the Finns was successful. Their mortars were zeroed in on the road and on the fence line (I gave them that advantage in the scenario) so it was easier to estimate where the Soviet assets were. Accordingly they were able to neutralise much of the Soviet mortar strength and quite quickly their MGs and rifles began to pin and mow down the advancing Soviet infantry. One turn alone accounted for 5 bases wide out! Very lucky dice rolling on the firing was making up for poorer LP rolling. 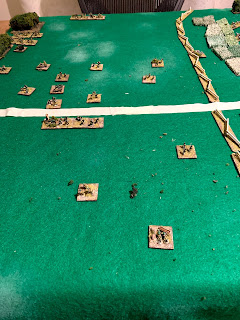 With their numbers, the Soviets were able to push forward more infantry to leapfrog their pinned comrades. When these began to get bogged down their LPs were used to unpin troops - but because I forgot to bring the Commissar unit into closer contact diminishing returns set in. It took me a while to think of using airstrikes. Three successive turns cleared much of the Finnish front line on the right including one mortar team in the road (lesson: nice neat lines do you no good!).  However, the Soviets luck began to run out. A sequence of ludicrously low LP rolls meant that the Soviet commander had limited options to get things moving again. The vast majority of them were pinned.

Because I had introduced a last minute rule giving a minus 1 to firing on pinned troops** on the basis that they were effectively in cover, the Finns didn't have anything to shoot at. Instead their mortars and off-board artillery pinned the Soviet commander in successive turns (the Commissar had also been pinned***). This meant a minus 2 on the Soviet's LP and in order to get things moving he had to unpin himself and try to dodge the incoming fire each turn.

* This was an encouragement to Finnish soldiers not to aim too high. Picking a point on the body that was, ahem, at the lowest part of the torso. This saying actually cropped up on the Unbelieveable Truth panel game on Radio 4 recently. It's contrary to the advice in this bloodthirsty song: Silmien Välliin (between the eyes)

** This made it impossible to eliminate them by shooting.

*** In fact he got a 'panic' result and was only saved because there were no Finns infantry firing within range.

With nothing much to shoot at, one Finnish section moved close to some Soviet pinned infantry - who were promptly unpinned on a rare case occasion that the Sovs won the initiative and they close assaulted the rash Finns eliminating them.

One Soviet LMG team and their commander made it to the woods on the low ridge on the Finns' right. The commander had finally made it into dead ground where he couldn't be targeted by mortars or artillery. Unfortunately for him and the LMG team, this put them within close assault range of 4 Finnish sections, who pounced with the historic war cry of "hakkaa päälle" finishing the job with Suomi SMGs and grenades. I called the game at this point. The Finns had lost 6 bases (1/3) and the Soviets 17 (1/2).

Thoughts afterwards. I made mistakes on both sides. The Soviets could have used airstrikes sooner. The Finns were lined up ready to be strafed. I could have done with more Soviet infantry and difference in the Leader point dice. Say a D12 or D20 for the attackers and a D8 or D12 for the defenders. The game took about 90 minutes to complete. It would have been a bit quicker but I was stumbling around the rules for a while.