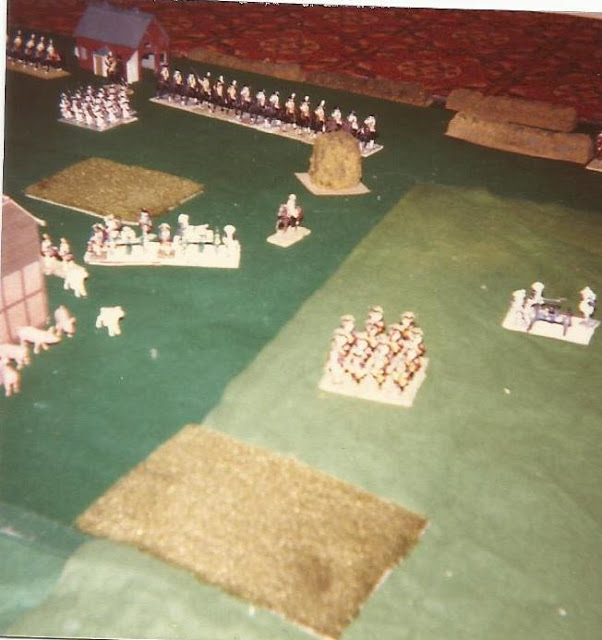 It's been quiet round here lately. A spell of the 'lurgy' plus recovery, 'yankers' and a visitor from  Norway have consumed my time recently. Things are heading back to 'normal', whatever that is, but I'm heading up to the ancestral home on my own this weekend to see the Old Dear. By choo choo, a rare treat. With no Mariners' home game on*, it must show filial devotion. Or something.

* to be honest they are probably best avoided in recent months.

The other night I was looking through some old files on a back up disc drive and came across this picture from about 40 years ago. This was from a 're-fight' of Kolin in what looks like my parents' dining room judging by the carpet.  Figures, apart from the pigs, were Minifigs. Card built barn from a kit, part of Airfix La Haye Sainte, scratch-built hedges and erm...a bush.

In shot in the centre ground is the Minifigs 'Ferdinand of Brunswick' personality figure, and 'Seydlitz' is in the background. Infantry battalions were typically fielded at 'full strength' (14 figure Prussian and 16 figure Austrian), but because of the huge size of cavalry regiments they were cut down to 15. At full strength they would be 21 for most heavies and cuirassiers, 30 for hussars and 42(!) for every schoolboy's favourite, the Bayreuth Dragoons. Clearly we weren't above fielding unfinished figures judging by the unadorned beer mat bases and unpainted hats. Flags were rarely seen even when units were fully painted and bases flocked.

Rules were WRG 1685-1845, barely modified (and we called ourselves wargamers!). One notable exception was artillery. At 2 guns to the model, batteries were very wide and, more importanly for us teenagers, expensive. So we turned the specified base sizes (40mm wide by 60mm deep) 90 degrees and said each model represented four guns. Given a figure scale for infantry of 1:50 this was a slight step in the 'right' direction. I would have reduced the effectiveness of the 2 figure irregular cavalry elements too but Old Skool Tony (or Current School Tony as he was then) would have none of it, being the proud possessor of an Austrian army.

For these refights, even at the 1:50 ratio, we didn't have the space, budget, or arm length for fullscale games. One battalion typically stood in for 3 or 4 but we didn't reduce the groundscale, so guns could sweep the board side to side. I've been a lover of artillery on the table ever since. Cavalry was probably too effective v foot in line too**. Still we had a LOT of enjoyment from the games. So much so that I've been thinking about staging a game using the 1685-1845 rules with my 6mm toys, with each base standing in for an 'element'. Conveniently the bases for my 6mm armies are 60mm wide. So infantry battalions will be represented by 72 or 96 figures. Excellent! Individual figure removal isn't possible so casualty markers will be used - once a 4th (regular foot) or 3rd hit (regular horse) is inflicted the base will be removed.

Post Script: for a view on how to do late 70s SYW Minifigs using WRG properly follow this link
That's the way to do it!


** though not as effective as we discovered one night at the local wargaming club, where the rules had been tweaked to the extent that one 'mad fool' charged across a stream, uphill into a square. And won! That put me off tinkering for a good long while. I still shudder at the memory. ;-)
Posted by nundanket at 16:49