The matches are lit. Prayers are being said. Firearms primed. A Roundhead deserter (probably a former Royalist soldier who had been offered the choice of 'freedom' shouldering a musket in a rebel regiment or labouring in a saltpetre workshop) had made his way into the old port of Grimsby the night before bearing news of the intended assault on the morrow. The Royalist regiments stand to. Battered in the great battle of Clee Fields five weeks before, astounded to have been thrown back by the Roundheads, they are now rested and ready to give a good account of themselves.

God looks down on the old town. 'Will it burn, this home of the old pagan Grim', he asks himself as he surveys the eastern marshes and the approaching columns. He rather hopes not because of its association with fish, the symbol of the early followers of his son.


The Parliamentarian guns commence bombardment of the redoubt on Holme Hill and the barricaded gateways to the south of the town with no effect despite some accurate gun laying. This is owing to miscalculations on the part of their commander who didn’t allow properly for the effectiveness of the defences - he really should have laid guns and the lines at closer range! 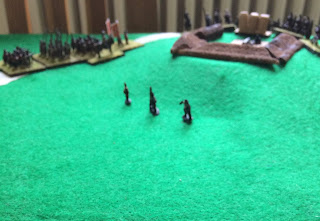 Nevertheless, on the right flank a cavalry regiment and the Red Regiment advance on the flanks of the redoubt. The plan was for the horse to drive off any supporting troops and for the foot to storm the earthworks, but on arriving to the north of the redoubt Lt Col Dickerage Lane saw there were no support troops and promptly ordered his troopers to dismount and to storm the redoubt from the rear. The startled gunners waited not upon their honour and climbed over the palisade and ran down the hill hoping to escape into the East Marsh.

The redoubt successfully taken the Parliamentarian foot and guns follow orders to turn to the town. It takes longer to rally the dismounted horse who are pillaging the abandoned redoubt for anything worth having - apart from the guns and ammunition, there are slim pickings so after a while they too return to order and remount.

The crisis approaches. The opposing foot have been engaged in a hitherto ineffective firefight. The Royalist shooting had been particularly bad - it must be due to the damp conditions in the town. The Tawny Regt was bloodily repulsed from the parapet by the White Regt and some of the Roundheads had to retreat into the marshy Haven. Nevertheless their General urged them on and they took up the firefight again. But all along the line the Roundheads are now beginning to drop. The only unit engaged that has not been battered is the Light Blue Regiment, having driven off the artillery and repulsed the Grey Regiment. 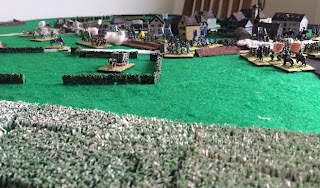 End Game: The Roundheads are pouring into the town from all southern and eastern entrances and are pushing back the Royalists through the streets. Only a counter-charge by the Blue Horse has seen off the Roundhead cavalry preventing defeat being turned into a disaster. The Dragoons unbowed again but fail to drive off the Light Blue Pikemen, those veritable Alexanders!, who capture the remaining guns before they are towed away. Remnants of 3 battered infantry units, the dragoons and all the horse escape over the bridge and across the West Marsh. 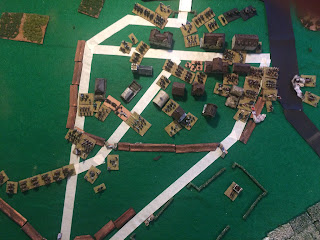 They will only pause to pillage Immingham, that nest of Puritans, once they realise the Roundheads are too exhausted to launch a full pursuit.