Autumn in the Baltic

We arrived back in the UK this evening to a balmy 12 degrees Celsius after an Autumn break visiting my in-laws. The temperature when we set off from eastern Helsinki was zero, but it felt like minus 10 with a northerly wind. Up in Lapland it has been as low as minus 26. Ouch!

Whilst there, as well as visiting the new library 'Oodi' (see last post), my other half and I had a couple of very enjoyable walks. Obviously chilly weather doesn't encourage people to go outside (especially during the working week) but I am still surprised by how quiet the city can be both on the roads and on the pavements. It's very pleasant to be in a city without crowds. Especially in a city where public transport is punctual, clean and very reasonably priced.

We saw a few things that might be of interest to wargamers and military history buffs (despite not going to Suomenlinna this time).  On Friday we took a stroll from the university district, through the 'Kauppatori', which in Summer is a bustling market place next to one of the harbours*, then past the swanky area around Esplanadi and up to Observatory Park. * In the Autumn it's, surprise surprise, still by the harbour, but not bustling. On the way to the park I spotted this memorial to German soldiers who helped fight for Finnish independence in 1917-18:

The Imperial German Army had a significant influence on Finnish independence. They recruited a battalion of Finnish jägers to fight the Russians - technically they were traitors to the Russian Empire, which Finland was then a part of. The Jägers became the cadre of the militant Finnish nationalist movement - armed, trained and organised along German lines (ranks are still known by German style titles - and the Jäger Movement went on to form the backbone of the Whites during the Finnish Civil War. Since then the Jägers built up a reputation as the elite troops during the struggle with the Soviet Union.

Once past the observatory we walked down through the Kaivopuisto district to the water's edge where you can see the western end of the Suomenlinna complex. 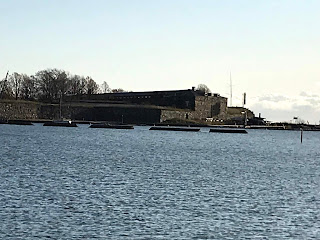 Heading back into the city centre I noticed we were on Kasarmikatu (Swedish:Kasernen Gatan) which rang a bell and I found myself humming 'Liisa Pien' a.k.a Lili Marleen (Finnish version here: https://www.youtube.com/watch?v=Bq6ostfO6MI and lyrics in many languages here so you can sing along :-)  http://ingeb.org/Lieder/lilimarl.html#dutch ). A hospital building further along the street looked distinctly like a neo-classical style barracks to me. There were no lasses standing underneath the street lamps though.

A bit further along the road opens up into a square (Kasarmitori) where the ministry of defence is located and where a new monument to the Winter War stands.

I'm not sure I like this monument. In fact I probably don't. The best bit for me is the collection of photos which you can see inside the sphere through the windows. My wife reminded me that her father was born into a family of refugees from the part of Karelia that was taken by the Soviet Union after the Winter War.

We warmed ourselves up with an excellent, good value meal in a small, friendly veggie restautrant in Fabiankatu (Zucchini, if you're ever in that part of 'Stadi') - the style of the place is more works canteen than anything the name, or indeed location, might suggest. Choice is pretty well non-existent, but that means the quality is high and price is low for Helsinki.

On Sunday (when the Sun never really pierced the mist) we caught the bus over to the west side of town where one of the presidential residences is located. https://en.wikipedia.org/wiki/Tamminiemi The place now is mostly associated with Urho Kekkonen ('UKK") who was president for from 1956-1981 and continued to live there until his death in 1986. Whilst the house was built around the turn of the twentieth century, the style internally is mostly late 20th century, UKK being found of modern art and design. Finland occupied a unique position during the Cold War and the house at Tamminiemi was where he often entertained visiting dignatories from East and West, including (famously) Krushchev in the sauna. I like to think the temperature was turned up very high, and Nikita could not lose face by being the first to leave, so was grateful and ready to make concessions when led out and offered a drink ;-)

What becomes clear is that UKK was an 'action man' and with an acute eye for a media opportunity. He was frequently photographed out on hunting, skiing and fishing trips, and regularly took runs well into his 70s. It struck me he could have been Putin's role model (perhaps he impressed the young KGB officer?) - though only in respect of Putin's style and not his nationalist, anti-liberal policies!

A short walk from the house is a bridge across to Seurassari, one of the many islands off Helsinki. What we didn't know before, was that Seurassari is a gold mine of old wooden buildings. We were just out there for a stroll round the woods. We found that the island has become an open air museum with old wooden buildings brought from across the country. Here are a few examples. 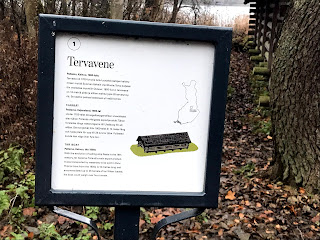 Miko over at On Wargames and Such told an interesting story about the Royal Navy's blockade of Russia in the Baltic in the Crimean War whereby the Brits burnt supplies of tar, despite locals explaining that the British government had already paid for it and was theirs to take!

When I get a little more time, I have some more pictures of rural buildings to post. These may be of interest to anyone who wargames any of the Finnish wars of the last couple of centuries.

Before I sign off I'll leave you with one more picture. But first a little background. Finland is famously a bilingual country. Equal status is given in law to Finnish (the majority language) and Swedish (at risk of losing its status as the second most widely spoken language in the country). Street signs, public buildings, instructions etc are all printed with both languages on them. Usually Finnish is first, but driving through the country you might notice the order changes to Swedish first where native Swedish speakers are in the majority. All seems right and proper. Place names often look different - they might be translated from one to another literally with the words being very different in each language (karhu and bjørn for 'bear' for example). Even when one language uses the 'same' word they look different because of the way they are said by native speakers and are then written down (e.g. Swedish 'gate', street, becomes Finnish 'katu'). Instructions can be even more different - the grammar is TOTALLY different. So it makes sense to have things in both languages. In those cases. Since I first started going, English has become much more visible, and signs can often be in all 3 languages. The Finnish civil service is to be greatly admired for its dedication, efficiency and even-handedness, and it will not be diverted from its mission. It is therefore capable of producing masterpieces like this: 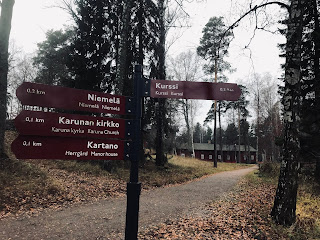