More on Cheriton - Orders of Battle

After my last post, I started thinking more about getting Cheriton on to the gaming table. First thoughts turned to the order of battle, so I reached for all the books on my shelves that 'covered' Cheriton, and I also searched for key sites on the internet, to see what they had to say.

If you're interested in the ECW you'll probably not be surprised that information is thin on the ground. There is mention of a few specific units and leaders on each side (but nowhere near the full order of battle). There are some names common to all sources, and a few that only pop in one place or another. Overall troop numbers are given with a remarkable degree of confidence in most of the books, but with not much consistency and with little in the way of sources quoted. I have to say here and now that I do not (yet) possess any of the books specifically about Cheriton published in the last 50 years, and they might reveal more. At 28 pages I don't anticipate a lot of detail in the Spring book; the Sawyer booklet seems currently unavailable; asking prices on the Adair book are beyond what I'm currently prepared to pay; and the Jones book is not yet published. Maybe I should get down to the library this weekend to see if I can find the Adair book through the inter-library lending service.

Being the slightly-OCD geek that I am (if you can be slightly OCD) I tabulated the sources thus:


Overall numbers of troops quoted on the royalist side vary from 5000 to 7900. On the Parliamentarian side the lowest number given is 8000 but most quote 10000. Again I tabulated what I found in the various texts. The squared bracketed numbers against Baker are my suppositions derived from his comment that the Roundhead cavalry was over 1/3 of the 10000 strong army.


Apologies for the small font on the table. I was struggling to fit it in.

On no stronger a basis than them being the most commonly quoted numbers, I'll probably go with 6000 Royalists vs 10000 Parliamentarians. Note of warning - the fact they're so frequently quoted but without good references probably suggests they're mostly repeating what some other secondary source said. Some of the books give some detail on the make up of the horse and foot, such as the oft quoted 'Appleyard's 1000 musketeers' sent to Cheriton Wood by Hopton.

Some leaders are mentioned, sometimes linked to specific units. The most useful sources in this regard are Burne & Young,  the BCW Project and Wikipedia. Putting them together we have the following:

Unfortunately not much else is clear about the infantry commanders.

Also mentioned; Col. George Lisle, who is the subject of one of my favourite anecdotes from the Civil War*, and Sir Henry Bard, the villain of the piece at Cheriton from the Cavalier point of view.

*# 4 regiments mentioned by Burne and Young: being the Red, White, Yellow and Green, of which White and Yellow were sent into Cheriton Wood under Leighton.

As with the Royalists, the PBI don't seem to get much of a look in.

In looking at the Smurthwaite book, I noticed that he has the Parliamentarian starting positions north of the Petersfield Road, and atop the ridge seen in my photo of Broad Lane in the previous post. This, if accurate, answers a conundrum for me. Most accounts refer to the 'arena' created by the ridges which run north, east and south of the field of battle. On walking the ground I found there was a ridge between the usually quoted starting positions of Hinton Ampner for the Roundheads and the monument near Scrubbs Farm for the Royalists. So the note with my fourth picture in the previous post wrongly says this is were the Parliamentarian line was - they would have passed through that way, but carried on to the next ridge. That being said, there is still a spur of higher ground jutting from Cheriton Wood into the eastern half of the field between the two starting positions as seen in this OS based map from the Battlefield Trust.

As I can testify, the spur does not have particularly steep slopes, but it is high enough to block line of sight of anything not near the crest. I would say it is a significant enough feature to represent on the gaming table. Talking of which, from that map I reckon an area modelling 2.5km by 1.5m would be needed as a minimum. My table, at my usual 1mm to the yard groundscale, is not deep enough. I'm about 700mm out. Hmmm! Back to the drawing board.

Totally a propos of nothing, except this post being short of pictures, I wonder if this car has anything to do with the late Dan O'Herlihy. 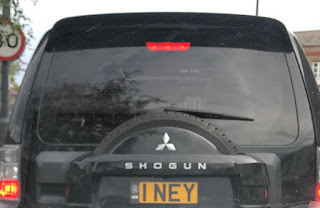 * Captured after the siege of Colchester in 1648, Lisle was sent before a firing squad with his friend Charles Lucas. Lucas was first and opened his shirt and invited the 'Rebels' to "do your worst". Lisle came next and having kissed his dead friend, invited the firing squad to step closer. "Sir, I warrant we will hit you", declared the officer in charge. Lisle smiled, then replied, "I have been nearer to you, friend, when you missed me".

Email ThisBlogThis!Share to TwitterShare to FacebookShare to Pinterest
Labels: ECW