A show, a game, a walk and a bench

It's been a strained couple of weeks which I might elaborate on at some point. However, I finally got down to some wargaming. After two weeks of the game being set up and ready on the table, I got down to running through Kesselsdorf with my rusty understanding of the Twilight of the Soldier Kings rules. More of that anon. The weekend before I had a trip up to north London for SELWG and met the Two Davids of The Ragged Soldier and St Cyr on Wheels blogs.

I enjoyed my day out (I'll gloss over the hordes of maskless NFL fans on the Tube) and it was nice to put faces to names from the blogosphere. Stand out displays for me were the 1930s Thai civil war game, the 1950s French Indo-China game, and the 2mm Ancients game which seemed to have a fully-engaged group of participants. No damage was done to my credit rating on impulse buys either.


More recently we had a family trip to my home town. Most of the branch down here and the Liverpool branch. We all assembled (6 in total) in Cleethorpes and had some good quality family time together, and some good quality fish and chips too. Forget everywhere else as far as the national dish is concerned, as it is a pale imitation. On the Sunday we walked along the south promenade and after deciding not to wait for the next departure on the miniature railway, we continued walking down the coast towards Humberston. I then remembered something I'd read about in a recent Grauniad [sic] article and suggested we head there.

This is the overly alliterative, but fabulous Buck Beck Beach Bench. Originally it was a makeshift bench made out of driftwood on the seaward side of salt marshes and dunes. Over time it has been built up, swept away, re-built and swept away again, only to be built up afresh. Nine or ten times. More can be read on it here. https://www.thefreelibrary.com/Blimey%2C+Buck+Beck+Beach+Bench%27s+blossomed!+the+origins+behind...-a0650673599

Close to where the bench is located, last year a walker discovered the remains of an aircraft believed to be a Bristol Beaufighter. I have no idea what happened to the remains after the bomb disposal squad attended the site.
Just offshore from here is one of a pair of WWI coastal forts guarding the mouth of the Humber. 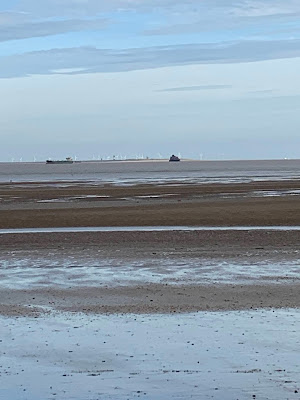 Bull Sand Fort, behind which is Spurn Head in Yorkshire.

I'll be back soon with a post on the re-fought Battle of Kesselsdorf.
Posted by nundanket at 18:05