I've been casting around for an inaugural wargame in the cabin. Fancying something Frederician, I flicked through Duffy for inspiration. Ideally I was after something I've not gamed before. Hohenfriedberg (1745) caught my eye. However, it is a beast of a battle, one of the largest in terms of manpower. More to the point though is it is more of an encounter battle in practice. Fred did have a plan but came upon the Austrian and Saxon camps sooner than expected and the battle evolved into a series of episodes involving columns of Prussians arriving at different times. I wanted something simpler to stage. A more straightforward fight, so I plumped on Kesslesdorf, also from 1745.

I have actually war-gamed Kesselsdorf before, several years ago with my son.

Kesselsdorf did not actually involve Fred himself. The Prussians were led in this battle by 'the Old Dessauer' (Leopold of Anhalt-Dessau), the famed father of the Prussian infantry and veteran of the War of the Spanish Succession. It was fought on 15 December 1745 in Saxony and was in effect the last major engagement of the Silesian Wars. Fred had beaten the Austrians twice that year, but Maria-Theresa would not give up. The Prussians former allies the Saxons had turned on Fred (who probably deserved it). In fact the Saxons had also been involved in the punch-up at Hohenfriedberg (a.k.a. 'Striegau') where they'd been badly handled by their fellow north Germans. The Saxons remembered this years later and their cavalry serving with the Austrians, charged at the Battle of Kolin with the cry 'dies ist für Striegau'. Fred and Leopold were leading armies on the Saxon capital Dresden from different directions but a Saxon army  under Field Marshal Rutowsky, supported by a small Austrian force, was between the Old Dessauer and city.

The Saxon left was anchored on the entrenched town of Kesselsdorf, with the right (held by the Austrians) rested on the Elbe. In front of the position was a stream. Leo launched an attack on the town and simultaneously on the centre-left of the line. Initially unsuccessful, a rash Saxon counter-attack led to defeat and the rolling up of the Saxon position. The Saxons routed in panic on Dresden, and despite an Austrian army being on hand to stiffen their resolve, the Saxons quit their capital whilst a now united Fred and Leo marched in to the city. The Austrians sued for peace, leaving Fred in possession of Silesia, the Saxons got off with their territory in tact, and the Austrians were able to concentrate on fighting the French in the complicated series of wars known as the War of the Austrian Succession.

So onto the game. First things first.

I'll be using Twilight of the Soldier Kings again as they allow a fairly swift game, with easily remembered rules, suitable for this level of action. I'm pondering the merits of converting them to a hex-grid at some point, as I think they could be good for a remote game. What isn't so good is the scale of my toys, at least with my current cameras (i.e. my phone camera or the built-in camera on my Mac).

There's a discrepancy between this and the map given on the confusingly named 'British Battles.com'. The map in Wiki gives a distance of 8km from the Prussian left to the Elbe. British Battles has it more like 6km, though the Prussian left could be shown just a bit later in their advance. Even if that is the case, there's still about 1km difference. Duffy’s map just focuses on the centre and left of the allied position so is not much help. A look on a satellite map shows 8km or 5 miles would be nearer the mark allowing for 1mile (1.6km) from the centre of Kesselsdorf to the edge of the table. 8km/5 miles is approximately 3.miles is something like 175cm in my chosen ground scale. Longer than either my garden table or my desk. I don’t have a permanent wargame table yet.  I could combine the two but the desk is 6cm higher than the table. Hmm.

However I manage it, the table will be covered with my usual green felt, but then overlaid with some semi-transparent ‘accoustic floor foam’ that the builder who did the loft seems to have left. This material is white so I'm hoping it'll be good to represent the snow covered ground. It was sitting in the old shed for 3 years and its day has finally arrived! 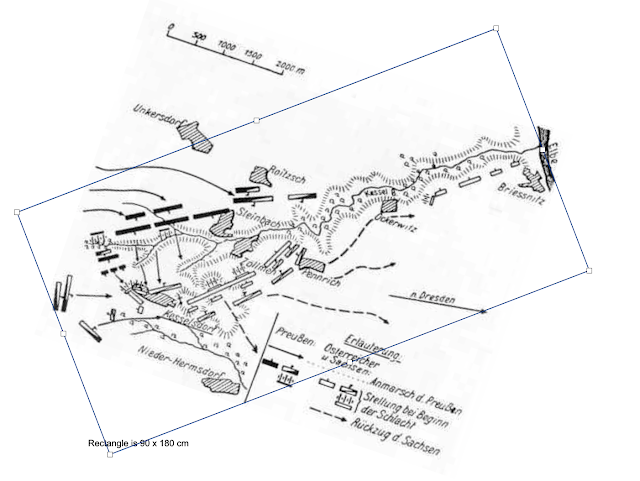 Overall numbers of men and units taken from Duffy, The Army of Frederick the Great, first edition. Prussian breakdown (e.g. between different types of cavalry) taken from the map in Duffy. For the Austro-Saxons I will have to come up with an arbitrary split between cuirassiers and dragoons, and designate some of the infantry as grenadiers, as there seems to have been some at least involved as full units in the counter-attack. About 1/5 of the allied force will be Austrian.

Bases of cavalry and infantry are 60mm wide which notionally is about 300 yards, a space occupied by a 2 battalion infantry regiment or 5 squadron cavalry regiment. Two such bases make up a brigade, the basic game unit in Twilight of the Soldier King. Artillery units represent about 20 heavy guns. My artillery bases are 30mm wide, with 2 going to make up a unit.

Right, that's all organised. All that remains is to set-up the table and run the game on Wednesday (Tuesday night is football night again so I'll be glued to the wireless again).

* If I recall correctly, the Old Dessauer said something like this when he launched his bluecoats across the snow. Not that I was there.