So the painting's done. The aircon/heater unit was installed Wednesday. I've actually been using it for work the past week and a bit. Still some more work needed before it can become my war room.

We moved a bookcase/cabinet from the house to store my milhist/wargaming books in. It fits in the space nicely. I've got 4 linear meters to fit in to 4.8meters of shelf space, which, being the astute mathematicians that you are, you will readily realise is going to be sufficient. Subject to the height of some books. There's another couple of meters worth of general history, football books and Grimsby history books to go somewhere. Maybe they'll have to stay in the house. 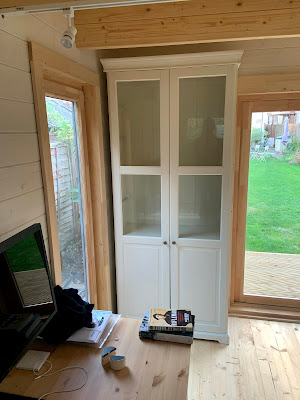 Then there's the small matter of my terrain boxes and 30 Ferrero Rocher boxes of toy soldiers.

I also still need a table or tables of some sort. A couple of 4 foot by 2 foot (120 x 60cm) fold-up jobs would do, if I use my desk (about 4'6" by 2'4"/140 by 70cm). 3 such fold-up tables would be better. Finding something sturdy enough is the problem. I was tempted by the 'bar tables' and stand/sit desks in the big blue and yellow shed near Croydon*, as they would be easier on the back whilst playing games, but they wouldn't have got past the stern eye of the Ultimate Authority on Interiors. Incidentally, I treated the UAI to a slap-up, no expenses spared meal in said furniture store. Well it was Saturday evening and a chap's got to spoil a lady.

* Other furniture stores are available. In theory.

From a wider use perspective we still want a sofa unit for the corner opposite the desk, but the preferred model, like more and more things in the UK,  is out of stock with no indication of whether it will ever be back in stock, at least until next year. The object we have in mind is an indoor/outdoor modular unit than can easily be moved.  With the shortages, it seems that as a country we've opted to become the Soviet Union without any of the benefits of actual socialism.

Summat along these lines would do nicely for the wall:

In other news, Grimsby Town's start to the new season continues to 'surprise and delight'. Four wins and a draw, including Tuesday night's 3-1 victory in front of a home sell-out crowd over 'Ryan Reynold's Wrexham' (tm all the national football media). It's always nice to beat a moneybags team. In terms of tier 5 in English football, Wrexham FC is a moneybags team. And yes, in typical messy British fashion, Wrexham is actually in Wales but compete in an English league. The last three games have involved Grimsby sportingly given the opposition a head start. That's class! No predictions about the season as a whole, but there's a buzz and togetherness not seen for many a year. What a nice way it would be to mark the 50th anniversary of the (locally legendary) promotion winning side under Lawrie McMenemy. I'm too long in the tooth to get that carried away, but cannot help reflecting that last month marked the 50th anniversary of my first match (a 4-3 win versus Doncaster Rovers, who we also gave a head start to). No! I'm determined to just enjoy the moment. 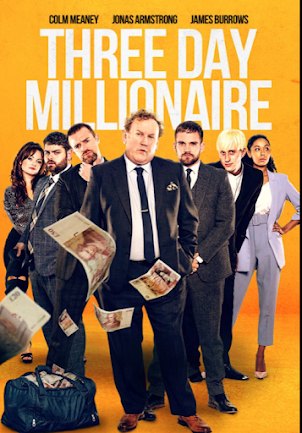