After my navel-gazing the other day, some ideas began to coalesce in my brain. The essence of my prospective campaign is a siege in the English Civil War. The ideas which I'm going to set-out could, in principle, be adapted for any siege in any age, but the inspiration came from my recent reading of David Cooke's Yorkshire Sieges of the Civil Wars. I'm probably drawing, albeit less consciously, on Wenham's The Great and Close Siege of York, 1644 and Young and Embleton's Sieges of the Great Civil War. The examples that particularly grabbed me from the last named, were the sieges of Lyme and Plymouth. Further back in my reading I was struck by the siege of Ostend 1601-04, as covered by Duffy in Siege Warfare. This though was on a more epic scale, in terms of time, manpower and materiél, than anything I am planning. 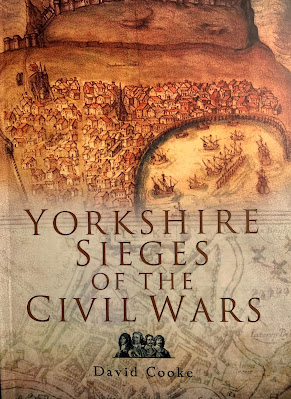 Now the great advantage of the ECW over any of the contemporary or later Continental wars was the relative lack of the Italian Trace and masters of siegecraft. I don't need to have a beautiful model of a bastioned enceinte. (Be careful how you say that. I think I got away with it). I understand that the only thing the English excelled in was mining (and sheer bloody-mindedness!) Plus ça change.

The central feature of the campaign will be the attempt by Parliament to capture a 'place' garrisoned by the Royalists. By 'place', I'm not sure yet whether I'm going for a York, a Pontefract or a Bolton Castle. I'm leaning more towards a Pontefract. Doing something on the scale of 'Ponteh' has obvious advantages in terms of table top space needed. Yet here's the thing, in the concept I have in mind the table top could be free of an actual fortress model for much or most of the time. I'm not going to be measuring out saps and lines of contravellation and circumvallation turn-by-turn. As siegecraft was relatively undeveloped or amateurish, the steady, predictable march of the siege after Vauban (who was a mere lad of 11 summers at this time) was unknown and as a result had less impact than other factors on when or whether a place fell. At least as far as my reading goes. And I readily admit, I may be unfairly stereotyping my compatriots' forebears.

So I'm looking at something set in, or starting in 1644 or 1645. Probably somewhere Yorkshire-ish, or maybe somewhere in Lincolnshire like Gainsborough, Tattershall Castle or Bolingbroke Castle. It did cross my mind to 'invent' a siege of Boston, though the garrison and siege forces would have to be swapped over and the clock dialled back a year or two. Such locations would be the more patriotic options for me, being from yat Country as I must learn to spell it. Boston would have the distinct advantage of not really needing any castle models at all.

The outcome of the siege will be determined by which sides reaches the lowest point on a 'scale of resolve' first (must come up with a more period-friendly term). Events in the campaign will move each side one direction or the other. For example, news of defeat of the Prince's army will be an Adverse Event for the Royalist garrison and a Propitious Event for the Parliamentarians. This will move the indicator so many spaces in the appropriate direction. Picture a snooker scoreboard, if you will, like the estimable M.Foy uses.

Some events, if successful, will lead to an immediate ending of the siege (game). Thus a successful storm will win it for the Parlies. A relief force winning a field battle will be an automatic win for the Royalists. I'm mulling over how a capitulation on terms could be introduced and whether there will be degrees of 'Honours of Warre' that mean a better or worse outcome for the garrison.

The game will progress by weekly turns. Except when a tabletop action is needed. Each turn I will dice or draw cards for events. Events available will be contingent on time, thus in the first four weeks I will not be able to draw an 'appearance of a relief army' card. Events, and the odds of them occurring, will also be contingent on other situations. First of all I will dice for the character of the two antagonists, who could be Aggressive, Active, or Placid. This could then influence the odds of things like sorties occurring. Here are a few examples of what I have in mind.

The breaching the walls; the springing a mine; the availability  of supplies (in turn determined by size of siege force); success of sorties; the arrival reinforcements; starvation; disease, attrition. External factors will affect the size of the siege force and some of the supply issues.

First month: Size of forces, Sorties, attempts to seize key landmarks, opening of siege works. These things could carry on into future months.

From the second month on we could start to see other types events. The attitude of the population in the surrounding area (besiegers) and in the place (garrison); the arrival of a Dutch/Huguenot engineer; the arrival of reinforcements; withdrawal of besiegers troops due to the approach of relief forces; the arrival of Bigg Gonnes due to fall of other places; convoys and attacks on them;  the construction or destruction of bridges. I'm minded to have a sliding scale of withdrawals depending on the scale of rumours of relief forces and/or actual battles elsewhere.

I can play out various actions on the table-top. Obviously sorties and coups de mains can be skirmish level. Attacks on convoys can be a higher tactical level (possibly my own rules or maybe Charlie Wesencraft's) and full-on battles can use something like Max Foy's ECW Ramekin or In Deo Veritas. I don't need to limit myself to fighting relief battles either. I could play-out a Naseby or a Marston Moor, the result of which will impact the relative movement on the scale of resolve.

There's still lots of work to do on this to get to a point when I can play the game. But at least I think I have a clear direction now. It might all fall down at an early stage. I haven't done anything like this before and getting the balance right between all the factors and possibilities will be hard to judge. And it might all be too dependent on the turn of the card with not much for me to do as a player. However, by doing this solo I have the distinct advantage of being able to change the rules if I don't think they are working well.

Sadly, there is less uncertainty over the fate of the Mariners after Tuesday's games. A home defeat to Morecambe, coupled with a win by Colchester means that we are 10** points adrift of safety with 4 games to play. Saturday could see a second relegation out of the Football League in 11 years, which is quite some achievement by one John Shelton Fenty (self-styled 'Principal Funder'***) who has somehow managed to overcome a bigger resource base than 3/4 of the division, and SIX permanent managers in 5 years.

** Effectively 11 due to the delta in goal difference.

*** Actually the principal funders are ordinary supporters who bought tickets and merchandise, and made donations to the club at key points. I could really bore you with his litany of faux pas, but I'll spare you the detail.