Today was finally C-Day. The extra extension was fitted to the dining table making it 8 feet long by 3 feet wide. Or 2400 yards by 900 in scale. I used my own rules again and this time found less need to tweak them, which is a good sign. But then I know what I was intending things to mean and playing solo does give you more opportunities to 'interpret' without a 'debate' with an opponent. The game took two and half hours, which is not bad, helped by the introduction of a simple break point mechanism. I worked on the basis of 25% of bases eliminated as being the break point. So the respective totals were:

I'd originally worked out orders of battle that had the same numbers of foot and guns as above but the Horse totals should have been higher. However, I had overestimated how many horse bases I had so each side had to be cut back. So I 'need' more cavalry. And staff figures - I barely had enough for two commanders and brigade commanders let alone the messenger figures needed. I need to have a serious conversation with the provost and the quartermaster general.

As mentioned in a previous post, I opted for the Adair hypothesis for the position of the battlefield rather than the traditional view. So my action was bounded in the north by the 'South Spur' of the 'Arena', in the south by the ridge that Hinton Ampner lies on, and the west by the valley of the River Itchen's headwaters. I didn't depict the stream on the table as it's effect would be negligible at that point. I started the game at the point where the London Brigade had already been ejected from Cheriton Wood.  For this scenario, I chose to depict two lanes boardered by hedgerows, heading from the South Spur. I intended these to take the part of those enclosures which reportedly restricted Royalist cavalry deployment. The two lanes were 'Alresford Lane', and 'Broad Lane'. On the table the lanes open out as the reach the field at the foot of the ridge. Until that point the cavalry advancing down them have to remain in route column - after that they could test to deploy (following normal house rules for change of formation/direction etc).

The narrative of the game is told below through the pictures with captions. The game started with some amazing shooting by Hopton's guns. Over the course of the game they took out 3/4 of their opposite numbers. The photos, unfortunately, do not show this bright spot for the King's men. 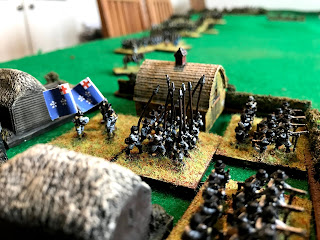